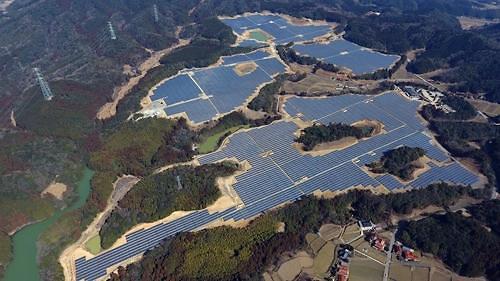 
SEOUL --
LG CNS, an information technology unit of South Korea's LG group, has built a solar power plant the size of 200 football fields on an abandoned golf course in western Japan. It was the fourth plant built on Japanese golf courses.

LG CNS said in a statement on Thursday that it has constructed a 56 megawatt-class solar power plant on a 27-hole golf course, which closed down years ago, near Mine city, some 792 kilometers (492 miles) southwest of Tokyo.

The company said the power plant can generate electricity which is enough to power 100,000 households for two years. It is Japan's eighth-largest solar power plant built on a land of about 1.4 million square meters, which is about the size of 200 football fields. A total of more than 170,000 solar panels were used in the plant.

"The solar power plant in Mine will become a footstone for foreign clean energy companies which find hard to enter the Japanese market," an LG CNS official was quoted as saying in the statement. He said LG CNS would seek to broaden its business in the overseas renewable energy market by utilizing its energy management system and energy optimization centers.

Since it launched its first renewable energy business in Japan in 2013, LG CNS has utilized abandoned golf courses scattered throughout the country and has constructed four solar power plants so far, including one building in Mine.

The global renewable energy market has been growing rapidly and is expected to reach $777 billion by 2019, according to New York-based market research company Statistica.