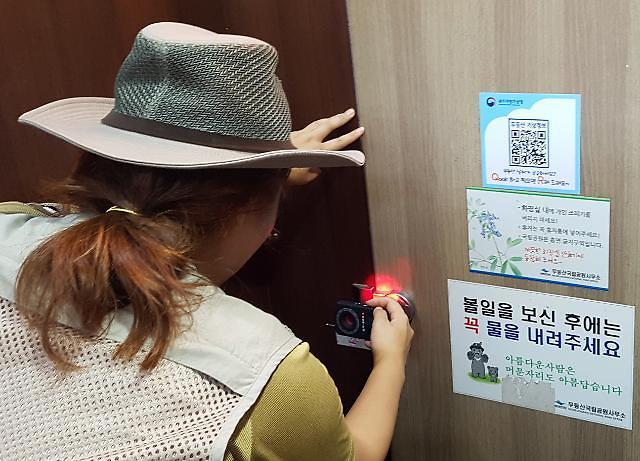 A national park employee searches for a hidden camera inside a public bathroom using a special monitoring device. [Yonhap Photo]

The Ministry of Government Administration and Home Affairs, the Ministry of Gender Equality and Family, and police made a joint announcement on Friday that they would operate special teams to conduct a regular inspection of public toilets.

In 2016, four male swimmers were indicted over a scandal involving hidden cameras installed in the dressing rooms of swimming pools inside an athlete's village in Jincheon 88 kilometers (54 miles) south of Seoul. Many other cases such as leaking of candid camera photographs followed, shocking the society.

"Furtive shooting is a serious act of crime which should not exist in a civilized society," Interior and Safety Minister Kim Boo-kyum told reporters, stressing the government deeply understands women's fear and anger toward such crimes.

Government inspectors will be armed with surveillance devices such as radio wave and camera lens detectors to find any hidden cameras in public toilets. Bathrooms in populated areas will be inspected more than once every week. Inspected toilets will be issued with safety stickers.

Kim called for a harsh crackdown on those who distribute illegally photographed contents. Some 1,200 online investigators from civic groups will monitor cyberspace to find anyone who uploads illegal contents onto social media, online file sharing services and explicit websites.