My Arduous Journey up Mount Bukhansan 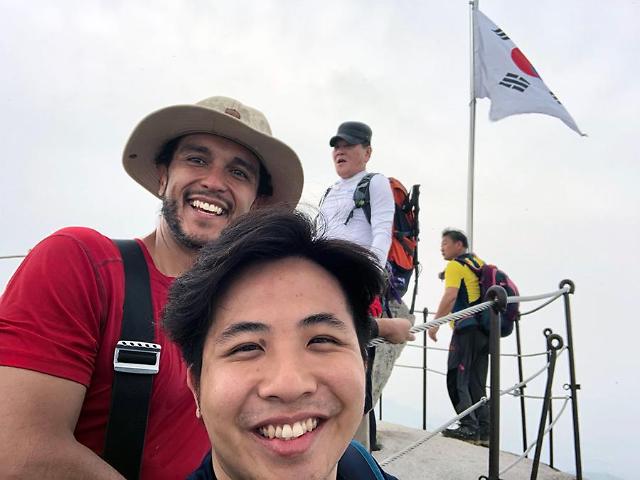 
SEOUL -- Working around the Central Business District (CBD) in Seoul, office buildings are surrounded by a cluster of mountains. My colleague has pointed out their names and how climbing is a hobby for the elderly.

I thought that if the elderly can scale, why can't I. And so, my journey and experience of this unparalleled sport up the mountain began. It wasn't as bad as I imagined, but the revelations and wonders that fell upon me were ones that I can never forget.

The Bukhansan National Park in Seoul houses the 78.45 kilometers wide mountain which towers at 836 meters above sea level. It is known to be the tallest mountain in Seoul with three major peaks. My colleague who decided to bring me along this journey asked me to make some serious mental preparation as this mountain was not an easy one.

Many shops selling Makgeolli, South Korea's traditional unfiltered rice wine, flooded the streets leading up to the mountain. Upon hearing an interesting insight from another colleague, many people scale the mountain just to get drunk at the end. I thought this would be a reward when I have reached the summit.

I took the easier path as there were many fascinating sites to see along the way. One can find the Bukhansanseong Fortress built along the mountain ridges, temples such as Sangunsa built by Buddhist monk Wonhyo (617-686), and a stone monument erected by Silla King Jinheung (540-576) at the top of Bibong.

The temples are representative of the rich culture that has flourished Bukhansan and include Munsusa located halfway up the Musubong Peak with purified mountain water dropping from the ceiling of a cave.

The initial road was manageable, with stairs and paved roads leading the way. Floras and faunas were littered along the way. The hiking path is known as a good summer mountain climbing course due to the presence of the unique flowers and the fall is the perfect time to visit the temples and pavilions.

Along the way, I saw many elderlies who were clad in trekking attire and carried big backpacks and two trekking sticks. I was just carrying a small backpack filled with two liters of water.  We only had water and were dressed in exercise shorts with humble sports shoes. Sadly, we were halfway through our journey and it was too late to back out. 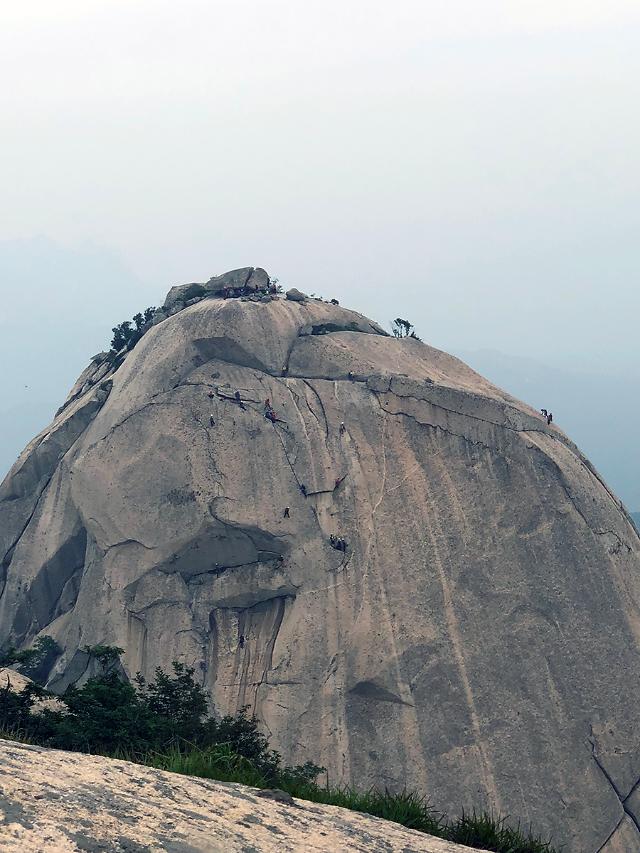 
After climbing endless flights of stairs and unending paths leading to the top, we finally reached the granite area, a sign that we were nearing the peak. Least expected, the climb was far from over. Our worn-out shoes were no match for the steep and slippery climb along the granite rocks. We held on to our lives by gripping tightly to the manmade handles and ropes along the elevated track.

After many long breaks and panting, we were finally at the top. The view was breathtaking. Sadly the skies were slightly cloudy, but it did not hinder our amazing view.

At the summit, we could see the peaks of other mountains surrounding Bukhansan's peak. I made friends with a Canadian who was in Seoul for a few days on a business trip. We exchanged insights on the amazing culture in South Korea where one will never go for a meal alone. Both of us received many encouragements from climbers along the way and some even guided us in the correct direction. Our virgin experience has been amazing and a revisit to this wondrous and elegant country is a must. 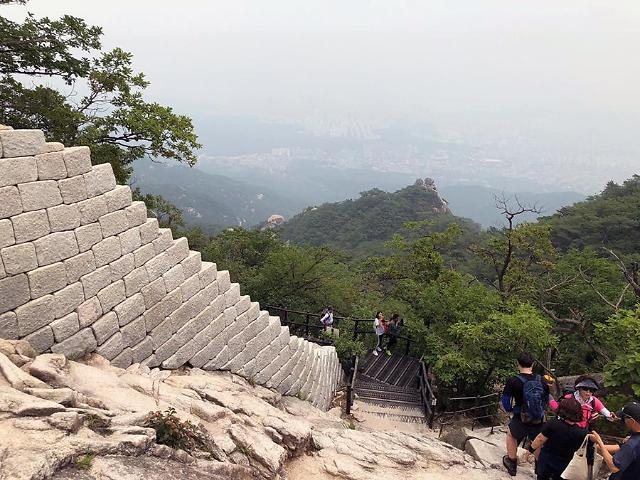 
My colleague and I shared a view of another bunch of thrill seekers attempting rock climbing at a nearby peak. The daredevils brought a whole new level to mountain climbing. It was scary and your life was literally hanging by a line. I thought that perhaps when I have fully recovered from this climb, I will overcome my acrophobic heart and attempt this feat. But first, I had to face a pressing problem -- making my way down with my tired and trembling legs.

I thought that making our way down was an easy game as we could let gravity do the work. But I realized that a different muscle was activated that further aggravated my tired legs. As we were already worn, it was another arduous journey.

On the way down, we passed by streams. Clearwater was running and I saw many elderlies washing. The climb seemed like a piece of cake for them as they were enjoying and laughing in the waters. I washed my face. Rejuvenated, we continued our journey down and after what seemed like an eternity, we were finally at the base.


Somehow, my colleague and I got lost on our way down. We began our journey west of the mountain and ended up east. In total, it took three hours to scale to the top and four hours to get down. It looked like we had crossed the entire 78.45 kilometers wide mountain – an amazing achievement for both of us. We forgot about enjoying Makgeolli as we were famished. We headed off for some food before going home to get a good rest from our exhausting day.

I shared with my colleague on many elderlies climbing the mountain. It was a favorite past time for them as they may probably feel out of place with the cafes in Seoul that catered to the younger population. Mountain climbing was a way for them to get in touch with nature and keep up with the youthful image of Koreans. This was a great way to engage in active aging and I stored this at the back of my mind to remind myself to keep an active lifestyle, instead of degrading into a couch potato when I grow old.

To wrap up my fascinating experience, climbing the mountains when one visits Seoul is a must to take on. It is refreshing, rejuvenating and gives you a complete experience of life in South Korea. You will be surprised at what you may find on your way up and down with the many wonders of nature along the way. Trust me, your story on this experience will definitely be one that lives on.


This story was contributed by Jazin Wee, an editorial assistant based in Singapore.