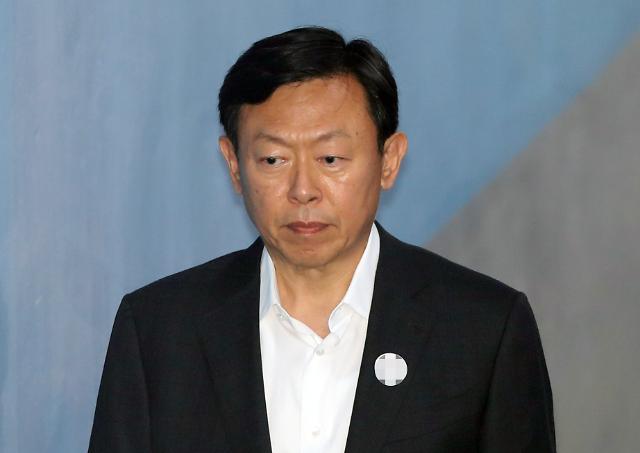 
SEOUL -- The jailed head of South Korea's fifth largest conglomerate Lotte retained his seat in the boardroom of a Tokyo-based holding company which controls Lotte affiliates in Japan, thwarting a fresh bid by his brother to come back.

In a meeting of shareholders in Tokyo on Friday, Lotte Holdings, the holding company of Lotte's business in Japan, rejected a motion to dismiss group chairman Shin Dong-bin as a board member.

The motion was presented by Shin Dong-joo, the chairman's elder brother, who has been locked in a protracted fraternal feud over control of Lotte, which was founded by Shin Kyuk-ho, 95.

Lotte Corp., the group's Korean holding company, said the chairman could not attend the meeting in Tokyo because a court rejected his request for bail. The vote was crucial because the Japanese holding company has considerable stakes in Lotte's affiliates in South Korea.

In February, Shin Dong-bin, 63, was jailed after a court in Seoul sentenced him to two years and six months in prison on charges of bribing Choi Soon-sil, the crony of South Korea's ousted ex-president Park Geun-hye. Choi received a 20-year jail sentence for meddling in state affairs and coercing conglomerates to make illegal donations.

The family feud for managerial control of the group was caused by the ailing father who founded Lotte as an ethnic Korean living in Japan. He has been in his dotage without making a clear decision on his successor.
In late 2014, Shin Dong-joo was ousted from his post and his brother seized control of Lotte Holdings, insisting his father has been mentally incompetent with age. Since then, the two sons have continued to challenge each other's claims to the empire.