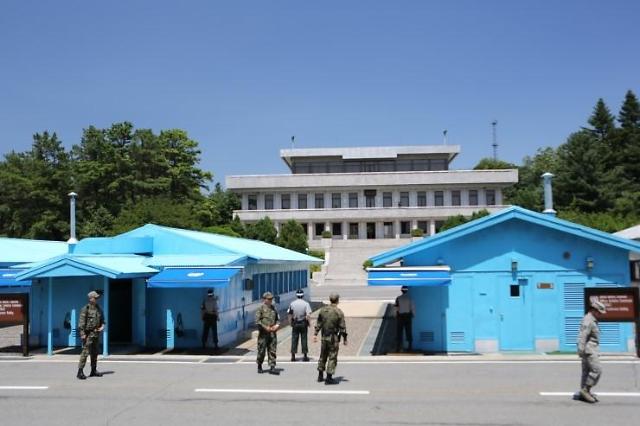 A file picture shows soldiers on guard in the truce village of Panmunjom. [Aju News DB]


SEOUL -- U.S. delegates turned on their heels after their North Korean counterparts did not show up for talks in the truce village of Panmunjom this week on repatriating the remains of American soldiers killed or missing during the inter-Korean conflict.

At first, the absence of North Korean officials Thursday in Panmunjom cast a cloud over negotiations on returning the remains across the heavily armed inter-Korean border, but an unconfirmed hidden story popped up a day later.

The aborted meeting led to the inadvertent reopening of a severed military hotline in Panmunjom, Seoul's Yonhap News Agency reported, adding North Korean delegates could not come because they were busy restoring a channel of communication with U.S. troops and physical preparations for repatriation were not completed.

The reopening of a hotline for military talks carries great symbolic meaning because hand-held megaphones have been the only means of communication in Panmunjom to exchange messages between North Korean and American troops for five years.

Panmunjom encompasses an 800-meter wide enclave, roughly circular in shape and created as a neutral area. The hedgeless truce village where a historic inter-Korean summit took place in April is the only contact point inside the demilitarized zone which has split the Korean peninsula since the three-year war ended in 1953.

Since the war ended in an armistice with no peace treaty signed, the jointly guarded area has been the site of military negotiations. The United National Command (UNC) has controlled the southern side of Panmunjom because troops from the U.S. and other countries fought alongside South Korea under a U.N. flag to repel North Korea's invasion.

In 2013, North Korean troops refused to recognize the UNC's peace-keeping role and cut off a military hotline in a unilateral move that prompted UNC representatives to use hand-held megaphones if they have any urgent messages to be delivered to their North Korean counterparts.

At a landmark summit with U.S. President Donald Trump in Singapore in June, Kim promised to repatriate the remains of American soldiers. Talks have been held in Panmunjom to repatriate some 200 sets of remains.

Once the remains cross the border, they will be moved to a U.S. air base in the southwestern port city of Osan before being carried to Hawaii for forensic identification. From 1990 to 2005, North Korea returned 629 sets of remains to the U.S.

The U.S.-led UNC is a unified command structure for multinational military forces, established in 1950 to support South Korea during the war. It has been headed by the commander of some 28,000 U.S. troops stationed in South Korea under a mutual defense pact. The American commander still has wartime operational control over South Korean troops.