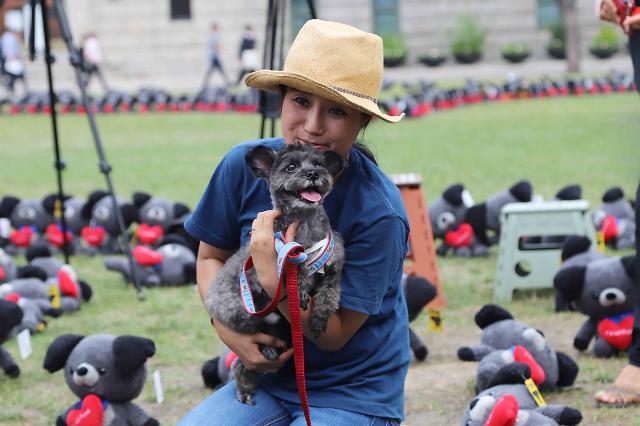 
SEOUL -- Tori, the adopted pet dog of South Korean President Moon Jae-in, appeared in an event organized by animal rights activists in central Seoul Tuesday to accelerate the adoption of abandoned dogs and oppose the consumption of dog meat.

At the request of the Coexistence of Animal Rights on Earth (CARE), an animal rights group, Moon's First Dog was allowed to participate in a campaign on a public plaza filled with 2,108 Tori dog dolls that carried a slogan ''I'm Not Food!"

Through his daughter, Moo has handed over Tori to CARE president Park So-youn, who organized the campaign marking "chobok", the first day of the hottest summer period on the lunar calendar. Traditionally, Koreans have consumed stamina foods such as ginseng chicken soup and dog meat to fight the chobok heat.

Tori, a black homeless mongrel dog who was kept at an animal shelter after being rescued from a dog meat farm, has been adopted by Moon, an animal lover, to live together at his residence. Tori has become the symbol of a social campaign to accelerate the adoption of abandoned dogs and cats. Activists say thousands of dogs are abandoned every year.

On Tuesday, animal rights groups held rallies and other events demanding a complete ban on butchering dogs for table use, a controversial social issue which has caused international criticism and catcalls.

Eating dogs have settled as a Korean tradition for ages, but the population of eating dog meat has dropped dramatically in recent years thanks to an active campaign by animal lovers. Dog meat lovers and restaurants claim that eating dog is nothing different from eating beef, pork, or horse meat while activists say dogs are bred in meat farms and slaughtered in a cruel and unhygienic way.