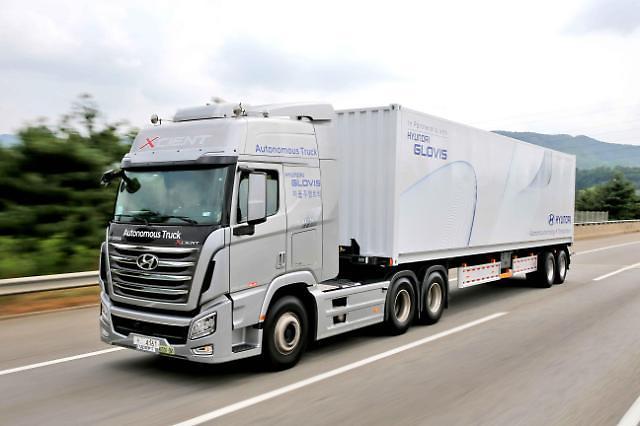 SEOUL -- Hyundai Motor, a top auto company in South Korea, made a breakthrough this week in its push for autonomous driving with the successful test of a large self-driving truck connected with a fully loaded trailer on a busy expressway.

For a one-hour test on August 21, the company used a level 3 self-driving system which provides self-driving features such as lane keeping assistant and highway driving assistant. Level 4 and 5 require intervention by a driver just in case of an emergent situation.

A 40-ton Xcient heavy truck loaded with car parts bound for China successfully covered about 40 kilometers (25 miles) on an expressway between Uiwang, one of Seoul's satellite cities, and the western port city of Incheon, Hyundai officials said, describing its successful test as signification because it was the main route for cargo transportation.

This is the first time a large self-driving truck has been tested on an actual road in South Korea. However, Hyundai vowed to achieve the early commercialization of complete self-driving trucks that would revolutionize the paradigm of the logistics industry because they can significantly reduce traffic accidents, enable accurate transportation and reduce fuel costs and emissions.

For Tuesday's operation, Hyundai teamed up with Hyundai Glovis, a logistics subsidiary, to verify the availability of autonomous trucks in the logistics industry. Hyundai Mobis, a parts-making unit, provided crucial parts such as a new steering system.

Hyundai said the self-driving truck demonstrated technologies such as lane keeping in conjunction with a natural traffic flow, intelligent lane changing, complete stop and departure according to the stagnation situation and tunnel passing. In an expressway transition area, a driver took over to secure safety.

In the logistics industry, attention is being paid to "crowd" or cluster driving for large trucks that follow the moving range of a leading vehicle to increase stability. Hyundai aims to secure the technology of crowd driving after 2020.