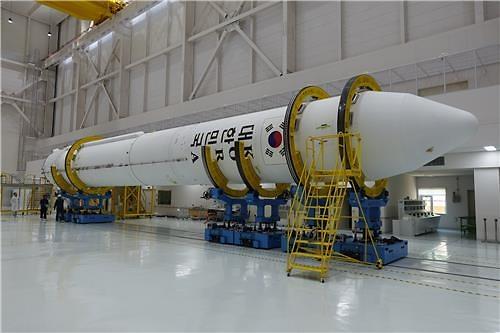 [Ministry of Science and ICT]

The rocket, carrying a locally made 75-ton engine, is set to be launched on October 25 from the Naro Space Center in Goheung, South Jeolla Province, the Korea Aerospace Research Institute (KARI) said.

If successful, four of the indigenous thrust engines will be used on the first stage and one on the second stage of the KSLV-2, KARI said. The whole rocket is scheduled to blast into space in 2021. "A successful test-launch next month will help the development of the KSLV-2 and researchers will gain confidence in the process," said Ok Ho-nam, a KARI official in charge of the launch.

The KSLV-2 rocket is to be South Korea's first locally designed and built space vehicle. It will be used to place unmanned satellites into Earth orbit and for other commercial purposes, KARI said.
(Yonhap)