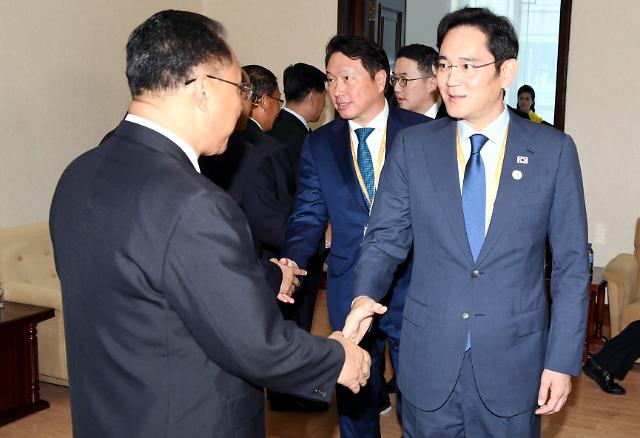 PYONGYANG -- Jay Y. Lee, the virtual head of South Korea's largest Samsung conglomerate, grabbed the spotlight when he mingled with other business leaders and North Korean officials at a session which took place in Pyongyang on the sidelines of an inter-Korean summit.

It was his first trip to Pyongyang, and Lee, 50, showed curiosity at a different culture of the same race, saying he saw everything written in Korean for the first time outside his southern homeland.

"There was a wall in my mind, but I felt that we are one as I came to see, experience and meet everyone," Lee said Tuesday when South Korean business executives met with North Korean Deputy Prime Minister Ri Ryong-nam and other officials at the People's Palace of Culture in Pyongyang.

The deputy minister caused laughter with a joke that Lee was already "very famous in many ways." "I hope you will become a famous person (working) for peace, prosperity and unification," he said.

"I want to know more and have an opportunity to build trust," the only son of Samsung's ailing group head Lee Kun-hee said, explaining Samsung's basic management philosophy that focuses on technology and talent.
For his three-day visit to North Korea,  South Korean President Moon Jae-in was accompanied by a group of business leaders, including SK Group chairman Chey Tae-won, LG Group chairman Koo Kwang-mo, Hyundai Motor vice president Kim Yong-hwan and Posco chairman Choi Jeong-woo.
Samsung has no major business concerns in North Korea, but Lee's appearance in Pyongyang sparked plenty of media speculation in Seoul because he has contained his public activity for his involvement in a massive corruption scandal that led to the ouster of South Korea's disgraced ex-president Park Geun-hye.

The scandal revealed deep-rooted collusive ties between businessmen and politicians, and Lee was arrested in February last year for bribing Park and received a five-year prison sentence last year. He was released in February this year after a high court suspended his sentence to ease widespread jitters in South Korea's business community about Samsung's global competitiveness.

Lee made his official comeback in July when he guided Moon at an event to open Samsung's new smartphone factory in India. He has controlled group management from behind since his father was hospitalized in May 2014 after being hit by a stroke.