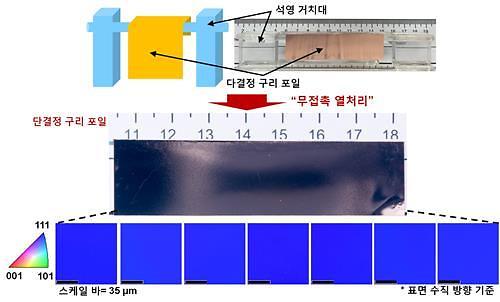 [Courtesy of the Institute for Basic Science]


SEOUL -- Researchers in the state-run Institute for Basic Science (IBS) in South Korea have discovered a new method to significantly reduce the cost of producing large and defectless single-crystal metal foils that could be used in many fields.

The new technique opened the way for the commercialization of single crystal metals and the development of next-generation electronic materials, the institute said in a statement on Friday. A related research paper was published in the prominent academic journal of Science.

The structure of metal materials bears some defects, known as grain boundaries, on the borders between each patch. Such defects worsen electrical and sometimes mechanical properties. Single crystal metals have no grain boundaries and show higher electrical conductivity and other enhanced qualities. 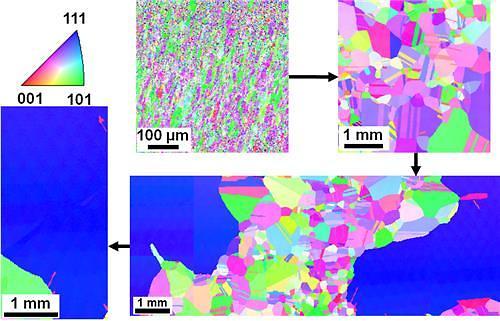 [Courtesy of the Institute for Basic Science]


Certain single crystal metals, such as copper, nickel, and cobalt, which are suitable for the growth of defectless graphene, boron nitride and diamond, are expensive. Conventional approaches or others based on the deposition of thin metal films on single crystal inorganic substrates achieve small single crystals at high processing costs.

A new method to obtain large single crystals up to 32 square centimers, made of copper, nickel, cobalt, platinum, or palladium, was invented by a research group at the IBS Center for Multidimensional Carbon Materials heded by Director Rodney Ruoff. The research also involved other scientists including Yoo Won-jong of Sungkyunkwan University and Shin Hyung-joon of the Ulsan National Institute of Science and Technology (UNIST).

It resulted in a "colossal grain growth," reaching up to 32 square centimeters for copper. Quartz holders and a rod were used to hang the metal foil, like clothes suspended on clotheslines, but details of the experiment varied according to the metals used.

Scientists have also achieved single crystals from nickel and cobalt foils, each about 11 square centimeters, the institute said, adding that the industrial production of larger foils is possible by using a different furnace.

"Now that we have explored these five metals and invented a straightforward scalable method to make such large single crystals, there's the exciting question of whether other types of polycrystalline metal films, such as iron, can also be converted to single crystals," Ruoff and Jin Sung-hwan, the first author of the study, said in the IBS statement.

"Now that these cheap single crystal metal foils are available, it will be tremendously exciting to see how they are used by the scientific and engineering communities," Ruoff said.