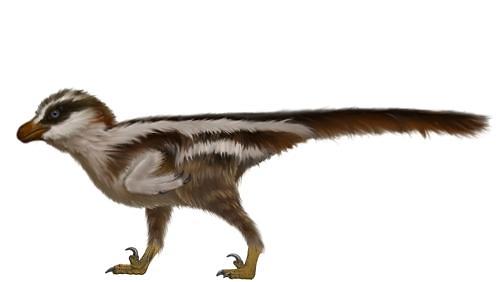 
SEOUL -- An international team of researchers has found the world's smallest known footprint fossil, also known as a trace fossil, of sparrow-sized micro-raptors from the Lower Cretaceous Period in South Korea.

The smallest known raptor tracks were found at Jinju Innovation City, a new town in the southern city of Jinju.

Micro-raptors are small, winged paravian dinosaurs and their fossils are mainly found in East Asia. The paravian dinosaurs have an enlarged sickle-like claw on each foot and only use two toes when walking or running. They are a distant cousin of Velociraptors, a larger species of the raptor family well known for its appearance in movies as cunning deadly hunters.

The geological research center at Chinju National University of Education said in a statement that an article about the micro-raptor footprint fossil named "Dromaeosauriformipes rarus", which means "rare-shaped-feet," was published in Scientific Reports, an international science journal.

The article was co-written by those from the Chinju research center, the Korea Advanced Institute of Science & Technology (KAIST), a state research institute, and other prominent foreign schools and research organizations.

The trace fossil was estimated to be about 110 million years old, Anthony Romilio from University of Queensland's Dinosaur Lab wrote in his YouTube channel. Unlike other raptor tracks found in South Korea, the Jinju footprints were only one centimeter in length, meaning that the tiny dinosaurs had legs which were about the length of a matchstick.

To make sure the Jinju footprints did not belong to the babies of different species, the researchers have studied other raptor tracks. They discovered larger tracks about 30 kilometers (18.6 miles) away from the Jinju site that belonged to the adult version of the tiny micro-raptors.