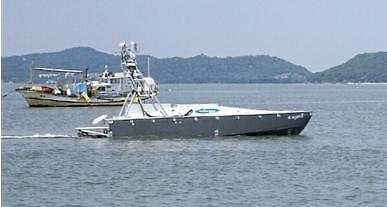 [Courtesy of the maritime ministry]


SEOUL -- Along with financial aid, small and mid-sized shipbuilders will receive orders for 140 vessels powered by liquefied natural gas (LNG) in a government campaign to recharge South Korea's ailing shipbuilding industry. The construction of LNG-powered ships is to meet new rules imposed by a U.N. maritime safety agency.

The aid package came Thursday at a meeting of policymakers, led by Trade, Industry and Energy Minister Sung Yun-mo. Small and mid-sized shipyards will get orders for 140 LNG-powered vessels worth one trillion won ($885 million) by 2025.

The package also includes a fresh loan of 700 billion won and the one-year extension of maturing loans worth one trillion. However, small and mid-sized companies were not happy because many cannot design and build LNG-powered vessels.

Under a government-sponsored program to help domestic shipyards, South Korean shipping companies will place orders for 200 ships worth eight trillion won for five years. But most of the benefits will go to major shipyards which have been put under painful restructuring to reduce their debt.

Some 2.8 trillion was earmarked to build bunkering facilities for LNG-powered ships by 2025. Bunkering is the process of supplying fuel for ships and includes the shipboard logistics of loading fuel and distributing it among available bunker tanks.

Compared to conventional fuels, LNG is a proven commercial solution to meet ever-tightening emissions requirements. South Korea has launched a state-sponsored project to build the world's largest LNG-propelled vessel. Government data showed that demand for natural gas would grow to 40.49 million metric tons in 2031 from this year's 36.46 million tons.