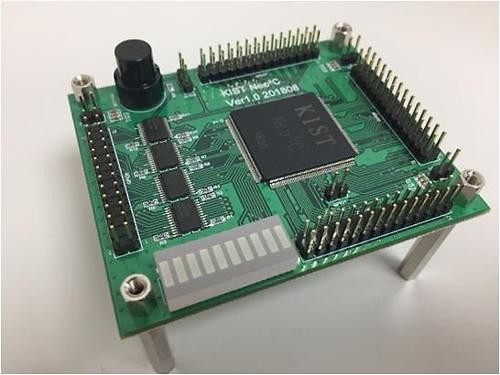 [Courtesy of Korea Institute of Science and Technology (KIST)]


SEOUL -- Top researchers from South Korea's prominent research institutes and universities joined forces with a research team from the University of California, Irvine, to develop a neuromorphic chip which has a self-learning neural structure like a human brain, by 2021.

A neuromorphic chip does not need a central processing unit or a graphics processing unit to process data. The brain chip is about the size of a fingernail but its data processing speed is much faster.

"Our goal is to develop a neuromorphic chip capable of self-learning without the help of computers," Chang Joon-yeon of the state-funded Korea Institute of Science and Technology (KIST) told reporters. The project involves six South Korean organizations.

The neuromorphic chip, which consumes very little power, is vital to the Fourth Industrial Revolution. The brain regulates the connection strength of synapses through the interaction of neurons and processes information by sending and receiving electrical signals. The connection between neurons and neurons is called synapse.

In August, KIST unveiled "Neo²C", the prototype of a brain chip which is 16 square millimeter-wide and has a single neuromorphic core, 1,024 neurons and 199,680 synapses. The institute plans to develop a high-performance neuromorphic chip with one million neurons and 200 million synapses.