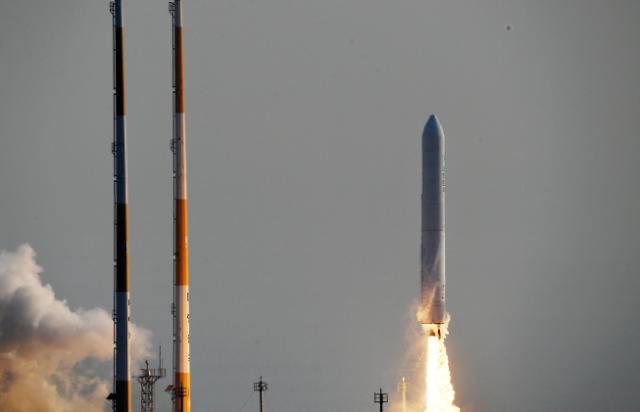 
SEOUL -- South Korea's first home-made booster engine was successfully launched and showed stable performance. The test launch on Wednesday was seen as significant progress in a costly state program to put a full three-stage indigenous rocket into space in 2021.

The 25.8-meter-long liquid-propellant engine for the Korea Space Launch Vehicle-2 (KSLV-2) was launched from Naro Space Center's launch pad in the southern coastal town of Goheung.

According to the Korea Aerospace Research Institute (KARI), the booster engine has successfully hit the combustion time of 151 seconds, 11 seconds longer than the initial goal of 140 seconds. The test rocket reached the maximum height of 209 kilometers (129 miles) and traveled for 10 minutes before falling into waters 429 km southeast of the southern resort island of Jeju.

Originally, it was to blast off in October but engineers put it off due to a pressure drop in the propellant pressurization system, which is a device for injecting fuel and liquid oxygen from the tank.

"Through the test launch today, we have confirmed that the technical preparations for the development of Nuri (KSLV-2) are proceeding smoothly," vice science minister Lee Jin- gyu told reporters.

The indigenous engines will be used on the first stage and the second stage boost of the KSLV-2 that would place satellites into Earth orbit. South Korea's space program has seen slow progress as other countries are reluctant to transfer core technologies. Three space rockets have been launched but two fired in 2009 and 2010 failed to reach orbit. The third one using Russian technology put a satellite into orbit.