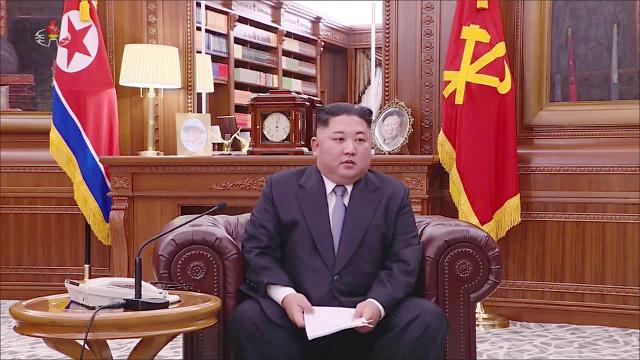 
SEOUL -- South Korea is cautious over North Korean leader Kim Jong-un's proposal for the unconditional resumption of suspended inter-Korean projects as Pyongyang has yet to resolve a dispute with the United States over how to achieve denuclearization to a point that could satisfy the international community so that sanctions can be lifted.

In his New Year message, Kim said he is willing to reopen a joint industrial zone in the border town of Kaesong and resume cross-border tours to the North's Mount Kumgang resort without any preconditions.

The tour program stopped in 2010 when a South Korean housewife was fatally shot by a North Korean guard. It used to be a symbol of inter-Korean cooperation along with the Kaesong industrial zone, which once hosted about 120 South Korean firms manned by more than 50,000 North Korean workers.

At a summit in September last year, South and North Korean leaders agreed to push for the resumption of suspended tour programs if things get better. However, the international community supports sustained sanctions until considerable progress is made in denuclearization.

"At present, it's not easy to reopen the Kaesong industrial complex and tours to Mount Kumgang regardless of sanctions," South Korean Unification minister Cho Myoung-gyon told a TV program Tuesday night, suggesting the two Koreas should put their heads together to see what they can do within the scope of sanctions.

Thae Yong-ho, a former North Korean diplomat in Britain who defected in 2016, told a forum Wednesday that Kim may hold new inter-Korean summits if he sees a breakthrough in his proposal. "What Kim Jong-un is most interested in is a realistic profit."

In his message, Kim expressed his will to achieve denuclearization through fresh talks with Trump, but he warned that he would find a new way if Washington misjudges his patience and clings to sanctions without reciprocating a series of proactive steps for denuclearization.

Thae said that Kim expressed his intention not to meet with President Donald Trump unless there is a compromise in denuclearization talks. "If the United States sticks to the dismantlement of North Korean nuclear weapons, there will be no progress in U.S.-North Korea relations or inter-Korean relations."

Kim's message is simple, said Harry Kazianis, a U.S. foreign policy and security expert who serves as director of defense studies at the Center for the National Interest. "Pyongyang is clearly willing to engage in dialogue while working towards denuclearization with Washington and Seoul -- but on its terms."

"North Korea seems determined in 2019 to receive some sort of sanctions relief -- or what Kim referred to as 'corresponding measures' -- as part of any bargain with the Trump Administration," Kazianis said.

The question is whether Washington is willing to back away from its position of "zero sanctions relief until Kim entirely dismantles his nuclear program," the expert said. "If the answer is no, then we very well could be headed back to the days of 'fire and fury', as Kim remarks seem to suggest his patience with America is wearing thin."

Now is the time for Washington to "truly test" North Korea's intentions, Kazianis said, adding that a grand bargain where both sides make corresponding moves such as a phased reduction in sanctions for a phased ending of the nuclear program could be the way to secure peace on the Korean peninsula "once and for all."