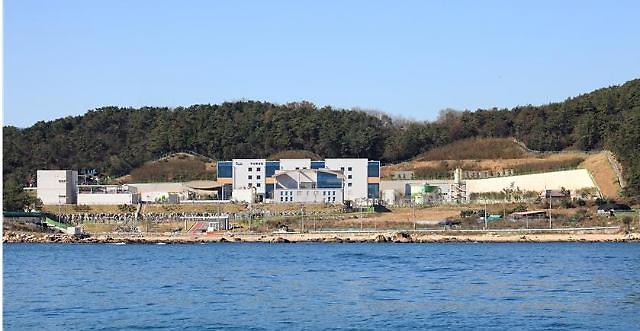 
SEOUL -- South Korea's biggest seawater desalination plant may come back to life, almost five years after public concerns about cooling water from a nearby nuclear power complex shelved its operation as a tap water provider.

In a coastal town in Gijang near the southern port city of Busan, construction of a major reverse osmosis desalination plant capable of producing 45,000 tons of tap water per day was completed in late 2014 in a project that cost about 195 billion won ($173 million) in state and private money.

From the beginning, the plant's operation hit a snag due to strong protests by dwellers in Gijang who have long lived in anxiety because South Korea's biggest Kori nuclear power complex was located in a nearby area. Public concerns grew in South Korea over the safety of nuclear reactors following Japan's 2011 nuclear meltdown in Fukushima.

As efforts to put the Gijang plant back into operation have become fruitless, Doosan Heavy Industries & Construction, the main contractor and builder of the desalination plant, withdraw in January last year.

This week, Busan city officials in charge of tap water supply came back with the idea of operating the desalination plant to produce industrial water for nuclear plants in Kori and industrial complexes. They plan to sign a deal with related bodies including the Environment Ministry, Doosan Heavy and K-water, a state agency for water resource development.

"Although the safety of water produced at seawater desalination facilities has been scientifically proven, we cannot carry out a policy for citizens just with a scientific basis," Lee Geun-hee, head of the Office of Waterworks in Busan, said, according to Yonhap News. "We decided not to use it as water for living, considering the emotional anxiety of citizens and psychological expectations."

Lee's office has yet to win consent from villagers as well as factory operators who have used cheap industrial water through their own facilities.

There are about 17,000 desalination plants being operated in some 150 countries to produce about 75 million tons of fresh water daily. South Korean companies including Doosan Heavy have led the global desalination industry, building a number of facilities, especially in the Middle East.