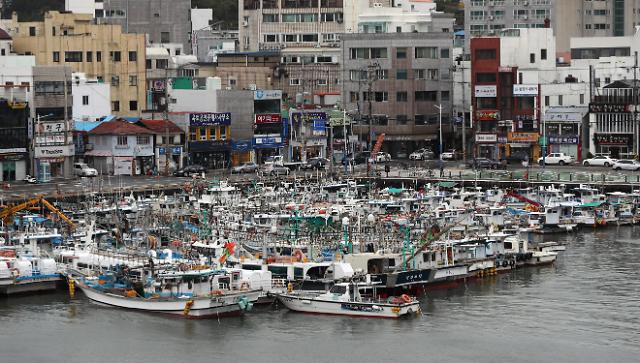 
SEOUL -- South Korea is ready to expedite the establishment of a joint fishing zone with North Korea along their dangerous maritime in the Yellow Sea if a summit this month between U.S. and North Korean leaders in Vietnam yields good results.

Oceans and Fisheries Minister Kim Yong-chun said Wednesday that joint fishing zones near front-line islands off the west coast should be discussed and set up at inter-Korean military talks, which depend on progress at negotiations between Washington and Pyongyang.

"I think that if the North Korea-U.S. summit proceeds well, we can speed up the formation and operation of a joint military committee" between the two Koreas, Kim said. To remove the risk of war, the two Koreas stopped all hostile activities on November 1 by setting up maritime, air and ground buffer zones in front-line areas.

Kim's comment came after the government decided to expand a designated fishing zone south of the maritime border from 1,614 square meters to 1,859 square meters probably from April 1. A 1964 ban on night-time fishing in the zone would be eased, allowing access for 30 minutes each before sunrise and after sunset.

Kim promised to open more areas for fishing and set up a joint fishing zone, if possible, in waters between South Korea's westernmost front-line island of Baekryeong and Jangsan Cape in North Korea.

Because the Korean conflict ended with a ceasefire rather than a treaty, the two Koreas remain technically at war. The maritime border has always been a flashpoint and was the scene of bloody naval clashes in 1999, 2002 and 2009. In November 2010, North Korea shelled Yeonpyong, a front-line island, killing four South Koreans and triggering concerns of a full-scale conflict.

The two Koreas recognize different boundaries dividing their territorial waters in the Yellow Sea. The North argues that the demarcation recognized by the South -- the Northern Limit Line (NLL) -- is invalid because it was unilaterally drawn by US-led UN forces after the 1950-53 Korean War.

The most dangerous area is located between Baekryeong and Jangsan because of illegal hit-and-run fishing by Chinese boats which have sneaked through a loophole in the inter-Korean maritime border. South and North Korean military vessels, fearing conflicts, have refrained from taking strong action.

For years, South Korea has captured and fined Chinese boats. Coastguard operations have become risky as Chinese fishermen often used steel pipes, knives and other weapons, triggering violent clashes that have caused casualties on both sides.

China has urged its fishermen to stop illegal fishing in waters of neighboring countries, but they continue to poach as fish stocks at home were depleted.