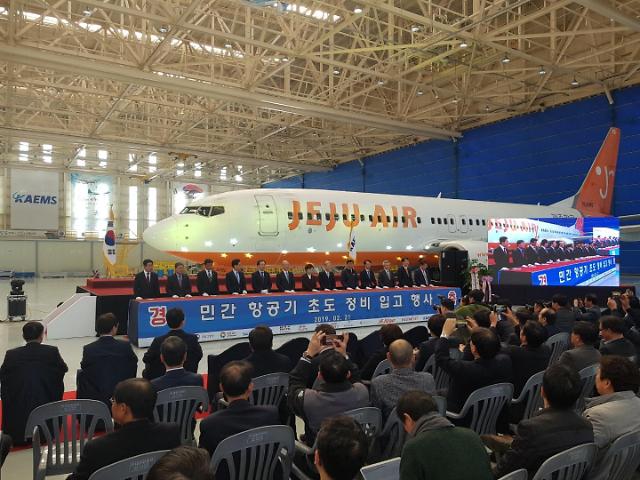 
SEOUL -- With the start of its maintenance, repair and overhaul (MRO) service, South Korea hopes to become a viable regional player in the global aircraft maintenance market that has maintained high entry barriers and requires a constant update in the use and maintenance of new technologies.

Moreover, industry and government officials believe that an independent MRO company will help South Korean carriers save about one trillion won ($889 million) in annual repair expenses paid to external contractors.

"The aviation maintenance industry must be fostered to build an industrial ecosystem and growth for aviation safety as well as aircraft production, transportation, and maintenance," Land, Infrastructure and Transport Minister Kim Hyun-mee said in a ceremony Thursday to mark the start of MRO services at the Korea Aviation Engineering and Maintenance Service (KAEMS).

KAEMS, based in the southern city of Sacheon, is South Korea's first MRO company led by the Korea Aerospace Industries (KAI), the country's sole aircraft maker which has teamed up with Korea Airports Corp., an organization specializing in airport management, BNK Financial Group and two budget carriers -- Jeju Air and Eastar Jet.

The first client was Jeju Air's B737 passenger jet, and KAEMS will provide its service to domestic budget carriers for a while before expanding it to major airlines at home and abroad.

"Sacheon will become the mecca of the aviation industry with this MRO business," Kim said. South Korea has tried to nurture an MRO industry for domestic carriers which do not have facilities for heavy maintenance and engine work. Korean Air is the only carrier to conduct its own heavy maintenance.

Aviation MRO comprises of individual segments for aircraft engines, components, line, airframe and modifications. With the global aircraft fleet projected to reach almost 38,000 by 2028, the MRO market is forecast to show steady growth.

By 2028, the global aircraft engine MRO market is expected to reach $52.6 billion with the market size of line maintenance expected to reach around $17.9 billion, according to Statista, an online statistics, market research and business intelligence portal.

To become a regional player, KAEMS hopes to expand the scope of maintenance to engines and win orders for the maintenance of military aircraft if it accumulates experience and technology.