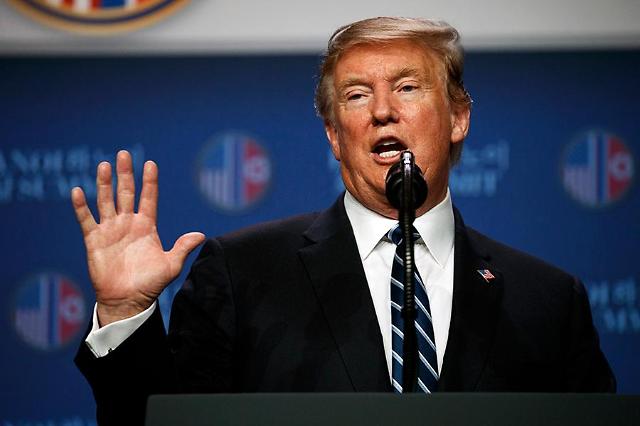 
HANOI -- U.S. President Donald Trump attributed the breakdown of talks with North Korean leader Kim Jong-un in Vietnam to his unacceptable demand for the complete lifting of sanctions. But Trump dangled prospects for a final nuclear deal, calling it "a very friendly walk."

"Basically, they wanted the sanctions lifted in their entirety, but we couldn't do that," Trump said after the two leaders walked away from the dialogue table without working out a concrete roadmap on denuclearization. The two-day meeting in Hanoi came eight months after the two leaders signed a monumental statement.

"They were willing to denuke a large portion of areas that we wanted, but we couldn't give up all of the sanctions for that," Trump said, "We have to have sanctions and he wants to denuke, but he wants to just do areas that are less important than the areas we want."

Trump said that Kim had a different vision of denuclearization, although it's a lot closer than a year ago. "And I think eventually we will get there, but for this particular vision, we decided we had to walk, and we will see what happens."

"I want to take off the sanctions so badly because I want that country to grow," Trump said. "But they had to give up more." Trump was still optimistic, saying the two sides could bridge the gap "at some point."

"We will see what happens over the next period of time, but as you know, we got our hostages back and there's no more testing," the American leader said, sending trust to Kim's pledge to suspend nuclear and missile testing.

The two leaders maintained a warm relationship even when they walked away after a productive two-day meeting, Trump said. "It was a very friendly walk." "I think our relationship is very strong But at this time we had some options and at this time and we decided not to do any of the options."

"Unfortunately, we didn't get all the way. We didn't get something that ultimately made sense for the United States," Pompeo said. "We asked him to do more. He was unprepared to do that."

"Real progress" has been made in the two-day meeting in Hanoi, but Trump and Kim "couldn't quite get along the line any further to make a deal that would have been bigger at this point," Pompeo said, adding he was still optimistic about a good outcome through further negotiations.

"I wish we could have gotten a little bit further, but I am very optimistic that the progress we made both in the run-up to the summit as well as the progress the two leaders made over these past two days put us in position to get a really good outcome," the secretary added.

For many years, the U.S. and the international community have put strict sanctions against Pyongyang, demanding complete and swift denuclearization.
Kim wants more than U.S. cooperation and rewards such as partially lifting economic sanctions. In previous negotiations, North Korea has been reluctant to make concessions without strong U.S. commitments to tangible economic and diplomatic benefits.