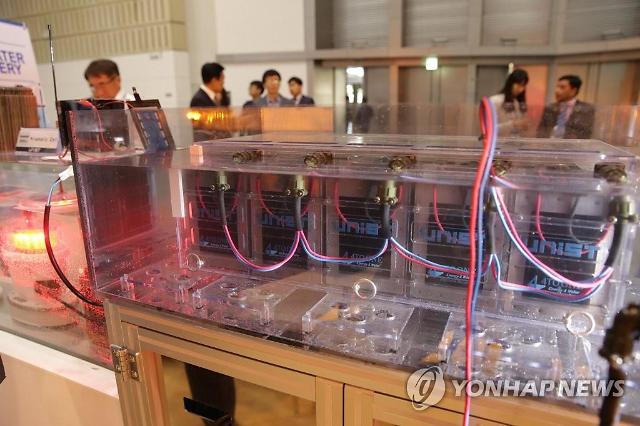 
SEOUL -- Construction of a research center to commercialize a new type of eco-friendly and cost-efficient batteries that can store and produce electricity using seawater began on the compound of a prominent South Korean science school.

The center at the Ulsan National Institute of Science and Technology (UNIST) in the southeastern city of Ulsan will open in 2020 to carry out a project funded by Korea Electric Power Corporation (KEPCO), a state utility company, and Korea East-West Power Co.

Seawater batteries, which use sodium to generate electricity, are eco-friendly and cheaper than lithium-based batteries. A UNIST team led by professor Kim Young-sik has developed related technology to offer a low-cost energy storage system (ESS).

In a ground-breaking ceremony on Wednesday, UNIST dean Jung Moo-young described seawater cells as a safe and competitive system that could lead the next generation ESS market. "We will lead the commercialization of seawater resource technology and open up the future of the new energy industry."

A 10-kilowatt energy storage system using seawater batteries was put into test operation in December last year at Korea East-West Power. The UNIST research team said that seawater batteries could be used as emergency power supplies for large ships and nuclear power plants because they operate without auxiliary loads or an external power supply, except for water and salt.