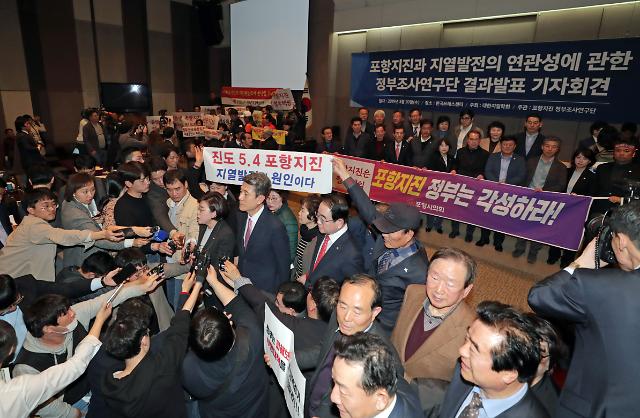 SEOUL --​ After a one-year field survey, experts blamed South Korea's first geothermal power plant for triggering an earthquake in the southeastern port city of Pohang in 2017 that caused numerous aftershocks and left about 60 people injured.

Pohang, some 270 kilometers (167 miles) southeast of Seoul, was hit hard by a 5.4-magnitude earthquake on November 15, 2017. Safety concerns grew after the city was rattled again by a 4.6 magnitude quake in February last year.

It was not the phenomena of nature, but the injection of high-pressure water deep into the Earth's crust to tap heat for the experimental plant activated a previously unknown fault zone, triggering an earthquake, a government-commissioned team of domestic and foreign experts said Wednesday.

"I can speak confidently and confidently about this outcome," team leader Lee Kang-kun, president of the Geological Society of Korea (GSK), an academic society, told reporters. Lee's team called for risk management.

Citizens have filed for an injection to stop the operation of the geothermal plant. In March last year, a district court in Pohang suspended the plant's operation until experts complete their seismic assessment. The plant capable of creating 6.2 megawatts of electricity was located in a place two kilometers away from the epicenter.

Compared to conventional geothermal plants which run on steam from within the earth, enhanced geothermal has been mentioned as a source of inexpensive energy, but scientists argue drilling deep to tap naturally occurring heat could cause earthquakes.

The technique involves the injection of high-pressure water into a hole drilled deep into hot rocks. As water forces its way into the Earth's crust, it carves new fractures into the rock and absorbs heat. Then engineers simply pump the heated water back to the surface and use the resulting steam to turn turbines.

Geologists insist the water-infusion step will create some seismic activity but the tremors can cause real damage as drilling-induced fractures can interact with existing seismic systems to produce quakes. A geothermal project in  Switzerland set off an earthquake, and drilling has been fingered as the cause of a massive 2006 mud volcano in Java.