Core component in artificial sun project on way to France 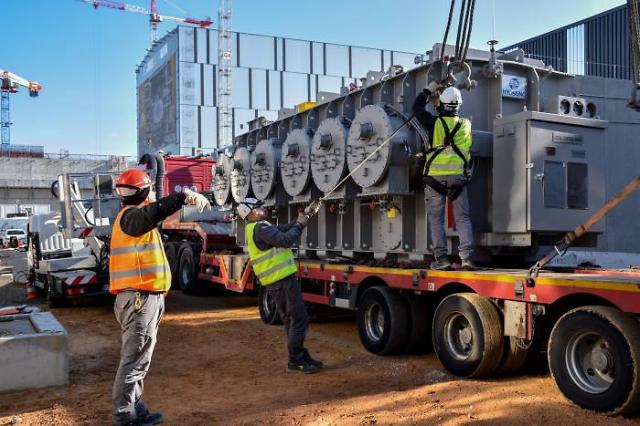 
SEOUL -- A core component developed by South Korean engineers involved in an international mega-project to create a fusion reactor, which is similar to the sun, was on the way to France.

Seven countries including South Korea, the United States, China and EU members have been involved in the International Thermonuclear Experimental Reactor (ITER) project to build an experimental fusion reactor in Cadarache, France. If the experiment is successful, it could provide mankind with a limitless energy source.

The National Fusion Research Institute (NFRI) said Wednesday that the first VS1 AC/DC converter for the superconducting magnetism power supply system has left for the Marseille-Fos Port in France. It is set to arrive in Cadarache in mid-May.

"Our product met tricky conditions after a long study," Choi Jung-wan, an NFRI researcher, said, adding it took about five years to develop and produce the first converter which effectively controls nuclear fusion plasma by supplying precisely controlled currents to each part of the superconducting magnetism system. It helps stabilize the unstable vertical position of fusion plasma at a rapid pace.

Out of 32 converters needed for the project, South Korea will procure 18.

Fusion power, generated by nuclear fusion, has long been spotlighted as a safe next-generation power source capable of reducing radioactivity. However, commercialization has a long way to go because it's extremely difficult to produce a state of controlled fusion. Plasma experiments will begin in 2025 and full deuterium-tritium fusion experiments in 2035.

In February, NFRI researchers said that KSTAR, a magnetic fusion device intended to study aspects of magnetic fusion energy, has successfully maintained a plasma center ion temperature of 100 million degrees Celsius for 1.5 seconds. KSTAR is a research tokamak to feature fully superconducting magnets, which will be of great relevance to the artificial sun project.