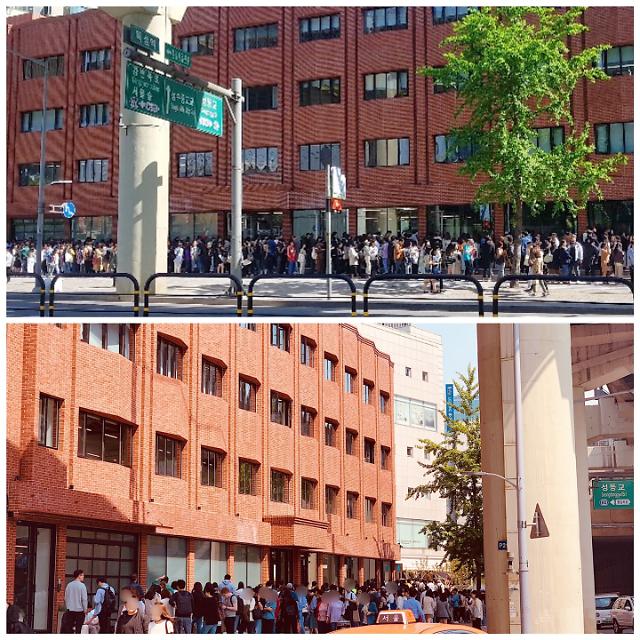 Hundreds of South Korean customers form a long line to get into the first store of Blue Bottle Coffee in eastern Seoul on May 3. [Photo by Aju Business Daily reporter Lee Seo-woo]


SEOUL -- Blue Bottle Coffee, an American specialty coffee brand that focuses on single-origin beans, made its successful debut in South Korea, with hundreds of quests standing in the queue even hours after the first store started its business in a rising hipster spot in eastern Seoul.

Shortly after its opening at 8 a.m. on Friday in a red brick store in the Seongsu district which has gained popularity among young people for unique coffee shops and hand-made shoes, about 200 people formed a long line and the first customer claimed to have spent more than seven hours in a nearby place.

Some people were seen using parasols to block out sunlight. Through a large glass window, passers-by can take a look inside the store, which housed a roastery, a training center for baristas and an order desk on the first floor. More than 80 seats were arranged on the basement floor.

"If you're in line now, you'll have to wait about four hours," a shop official told Aju Business Daily. "Some consumers are sitting on their seats in the store, but others are taking them."

The store was designed by Japanese architect Jo Nagasaka. Walnut chairs and tables provide comfortable feelings. It marked Blue Bottle's second international launch since it opened its shop in Tokyo in 2015. Blue Bottle plans to open a second store in central Seoul and two more by the end of the year.

The Oakland-based coffee roaster and retailer has built its reputation as the "Apple of coffee industry" among young South Koreans for its unique coffee menu and the minimalistic design of products and shops.

When Blue Bottle disclosed plans to open its first store in South Korea last year, consumers showed a lukewarm attitude, saying the domestic market has already been saturated with tens of thousands of coffee shops.

Founded in 2002 by W. James Freeman, initially as a home-delivery service, Blue Bottle now has 56 cafes in the United States and 10 in Japan. Swiss food giant Nestle bought a 68 percent stake in Blue Bottle in 2017.