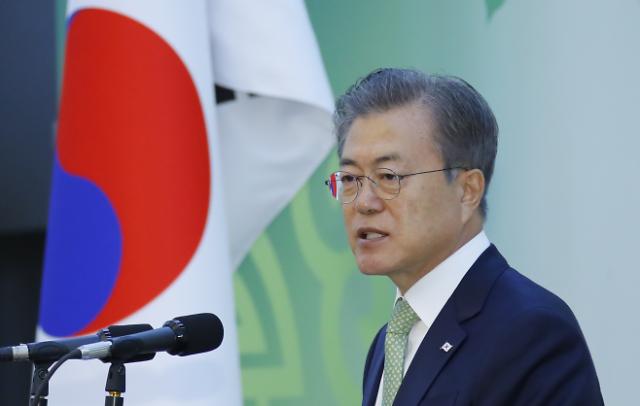 
SEOUL -- President Moon Jae-in shared his thoughts about an initiative to bring peace to the Korean Peninsula in a contribution to Germany's leading daily newspaper ahead of the second anniversary of his inauguration.

"The vitalization of inter-Korean economic exchanges will link surrounding countries and go beyond the Korean Peninsula to reestablish an economic corridor between East Asia and Eurasia," said Moon, who will mark the second anniversary of his inauguration on May 6.

"We are pondering the way for both Koreas to prosper in the interest of establishing permanent peace. We have already started work on reconnecting road and rail links between the two Koreas," he said in an article contributed to German newspaper Frankfurt Furter Algemaine Zeitung. Moon's article will be published later this month.

"The New Southern Policy and New Northern Policy being promoted by the Republic of Korea will further expand the peace-driven economy on the Korean Peninsula."

Moon stressed the greatness of ordinary people, talking about "Candlelight Revolution," a wave of anti-government protests that led to the ouster of his predecessor, Park Geun-hye two years ago.

"I have long regretted that my fellow Koreans no longer think about the space beyond the truce line," Moon said. "From now on, the North-South issue should not be misused for ideological or political purposes; rather, it must be expanded into an issue of life and existence for ordinary people. The North and South represent a community of life in which coexistence is a must," Moon said.

"The dialogue continues regarding the normalization of ties between North Korea and the United States alongside the denuclearization issue," the president said. "If the North Korea-U.S. dialogue results in complete denuclearization and the establishment of North Korea-U.S. diplomatic relations, and if the Korean War armistice agreement is replaced with a formal peace treaty, the old Cold War order will collapse and a new order of peace will start to reign on the Korean Peninsula."

"The onset of the spring on the Korean Peninsula began in Berlin. Following former President Kim Dae-jung, who made his Berlin Declaration in 2000, I came to Berlin in July 2017 to talk again about a new peace initiative that reflected the passion of the Candlelight Revolution," Moon said, referring to his "New Berlin Declaration" during his trip to Germany in 2017. "At the time, many dismissed this as simply being wishful thinking," he said.

"When I made my Berlin Declaration, I made four propositions, suggesting to North Korea that 'we first start with what is easy,'" he said, citing North Korea's participation in the Pyeongchang Olympics, the reunion of separated families, an end to hostile actions between the two Koreas and the resumption of inter-Korean dialogue and contacts.

"Perhaps surprisingly, all four of these proposals have happened during the past two years," he said. "In this way, spring is just around on the Korean Peninsula.."