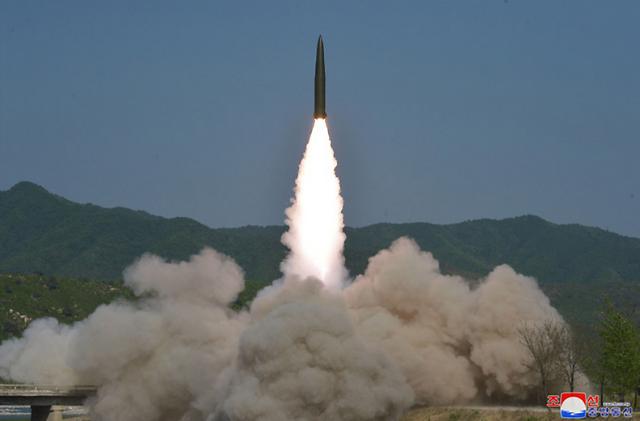 
SEOUL -- North Korean leader Kim Jong-un emphasized a strong physical force as he guided the strike drill of "various long-range strike means," Pyongyang's state media said, a day after the launch of what were presumed to be short-range missiles.

The latest launch came five days after North Korea tested "large-caliber long-range multiple rocket launchers and tactical guided weapons". Two missiles fired on Thursday traveled about 420 kilometers (260 miles) and 270 km, respectively, before falling into the sea, according to the South's Joint Chiefs of Staff. The Pentagon characterized them as ballistic missiles.

"At the command post, Supreme Leader Kim Jong-un learned about a plan of the strike drill of various long-range strike means and gave an order of start of the drill," the North's official Korean Central News Agency (KCNA) said on Friday. Kim was quoted as saying "the genuine peace and security of the country are guaranteed only by the strong physical force capable of defending its sovereignty."

U.S. President Donald Trump and South Korean President Moon Jae-in reacted nervously to the consecutive launch of short-range missiles that was seen as an expression of displeasure and frustration with a prolonged deadlock in denuclearization talks. Moon said that North Korea seemed to be "quite discontented" with no agreement at a summit in Hanoi.

Trump has advocated a "big deal" under which North Korea would dismantle all of its nuclear arsenal and related facilities in exchange for the removal of sanctions. Kim has threatened to take a different path, urging Washington to come up with a "fair" and "mutually acceptable" deal by the end of this year.

"It is judged to be a kind of protest against both the U.S. and South Korea, and at the same time, I think it contained the nature of pressure to lead denuclearization talks in the direction they want to be," Moon said in a domestic TV interview on Thursday.

North Korea has fired missiles in a "very low-key" way so as not to pose a threat to the U.S., Japan and South Korea, Moon said, urging Kim to refrain from actions that could put a damper on crucial denuclearization talks.

The launch of short-range ballistic missiles would not break a missile moratorium but still violate United Nations Security Council resolutions that ban the use of ballistic missile technology, Moon said. "In any case, I would like to warn North Korea that if such actions are repeated, it could make the current phase of dialogue and negotiations difficult."

"Whatever its intentions, the fundamental solution is for North Korea to sit down quickly with the U.S.," Moon said. "I think it is desirable for North Korea to clearly express its discontent in the dialogue table if it has complaints."

In an effort to expedite dialogue, Trump has supported the proposed shipment of food aid to the impoverished North, which has reduced state rations due to a food shortage, Moon said, calling for a public consensus about humanitarian assistance for hungry North Korean people.

South Korean state warehouses are packed with surplus rice reserves, which cost some 600 billion won ($509 million) a year to store, Moon said, hinting at the cross-border shipment of rice. After Moon took office in 2017, South Korea approved an $8 million economic assistance package through U.N. agencies, but it did not go to North Korea due to sanctions.

In their joint assessment on May 3, the World Food Program and the Food and Agriculture Organization said that 40 percent of the North's population was in urgent need of food aid due to a bad harvest that left the impoverished North with a 1.36 million ton shortage of grain.