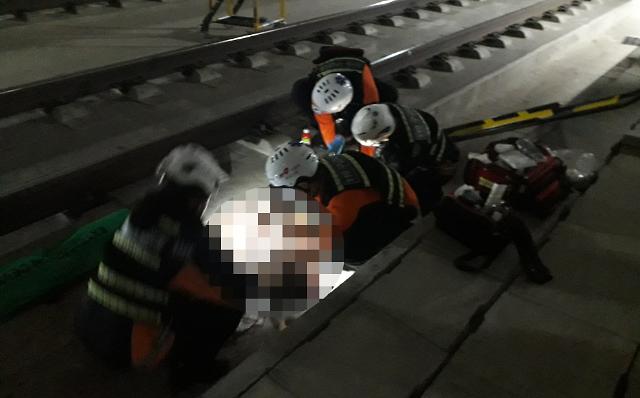 Firefighters rescue a 32-year-old woman who threw herself out of a moving bullet train on May 9. [Yonhap Photo]

SEOUL -- A 32-year-old woman miraculously survived a reckless suicide attempt after she broke the glass window of a bullet train moving at the speed of 170 kilometers per hour (105 miles per hour) with an emergency hammer and jumped off.

The woman was hospitalized after sustaining non-fatal multiple fractures, according to Korail, South Korea's state railroad operator. Korail officials believe the woman was very lucky to survive because the Korea Train Express (KTX) train slowed its speed down to 170 km per hour from its normal speed of 300 km while moving through a curved section between Osong and Gongju.

At 8:45 p.m. (1145 GMT) on Thursday, a train crew found the woman with her upper body protruding out of a broken window while checking tickets. Shouting "I don't want to live anymore!" she threw herself out, prompting the train crew to call a railroad police unit. An investigation is underway to find why the woman jumped off a moving bullet train.

The woman survived, but she may have to be fined for delaying KTX trains running on the same line. Korail estimated it should compensate about 27 million won ($22,950) to 1,108 passengers who were aboard delayed trains. The woman will also have to pay for the broken window.