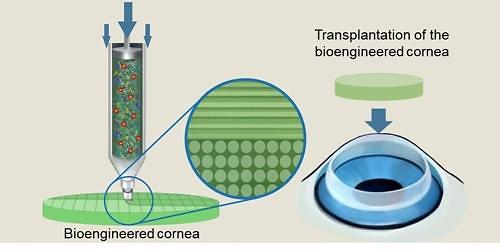 [Courtesy of Pohang University of Science and Technology ]

SEOUL -- Using a 3D cell printer and bio-ink made of decellularized corneal tissue and stem cells, South Korean researchers claimed to have developed a transparent artificial cornea which would greatly reduce the time for patients to wait for cornea transplant surgeries.

Pohang University of Science and Technology (POSTECH), a prominent South Korean science college, said in a statement on Tuesday that its research team has succeeded in creating a transparent artificial cornea, which is ideal for transplanting because it is made of materials originated from actual corneas.

The cornea is a transparent layer forming the front of eyes. If it is damaged and affects vision, a patient needs to have it replaced through surgery. However, there is always a long queue with some two thousand people waiting in South Korea as of 2018. The average waiting time is about six years.

"This research has secured both stability and transparency by simulating corneal microstructure using physical stress that occurs during 3D printing," POSTECH professor Jang Jin-ah was quoted as saying.

Many research bodies have created artificial corneas but they were not transparent enough to provide a clear vision. POSTECH researchers used bio-ink made of decellularized corneal tissue and stem cells and found their artificial cornea maintained its characteristics four weeks after it was transplanted into a rabbit.