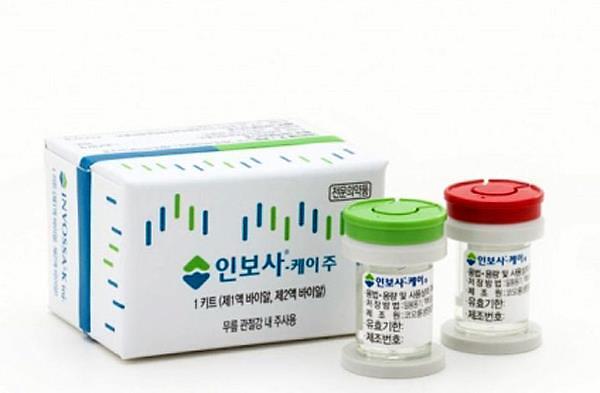 The Ministry of Food and Drug Safety said Tuesday that Invossa's key ingredient was identified as kidney cells, not cartilage cells as listed in documents submitted at the time of authorization. Data submitted by Kolon Life Science was found to be false, it said, urging prosecutors to launch a criminal probe into the biotech arm of South Korea's Kolon Group.

Kolon Life Science is suspected of knowing about the mistake before submitting an application, but the company argued that there was no cover-up. "The data submitted was not complete because we didn't have enough data on the initial development phase as of now, but there was no fabrication or cover-up," Kolon Life Science said in a statement.

Sales and distribution of Invossa were suspended on March 31 after Kolon TissueGene found during U.S. clinical trials that a key ingredient was different from that described in the data submitted at the time of permission in South Korea. Kolon Life Science apologized for having used a wrong name, saying that there has been no change in the constituents of Invossa, which used the combination of human chondrocytes and transfected cells with TGF-β1 genes.

Kolon TissueGene found in March 2017 that the substance of the drug had changed through a consignment producer and notified Kolon Life Science. On April 1, Kolon TissueGene suspended patient recruitment for phase 3 clinical trials involving patients diagnosed with knee osteoarthritis at 60 American hospitals.

Invossa has been administered to more than 3,500 people for 11 years at home, but Kolong Life officials claimed to have discovered no serious side effects. The drug is not covered by health insurance with its single injection cost standing at about seven million won ($5,900).