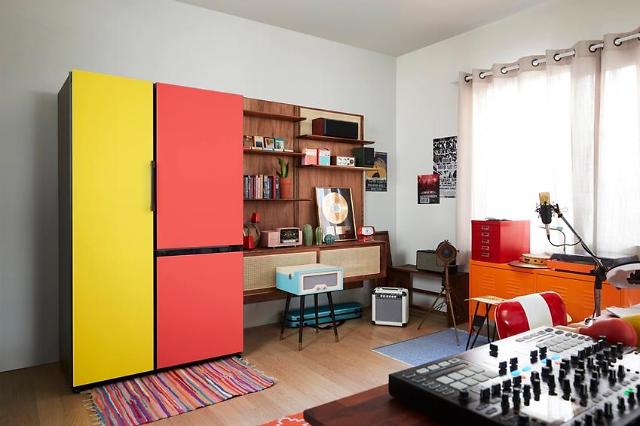 SEOUL -- Samsung Electronics unveiled the first new "Bespoke" refrigerator for its new vision project for home appliances that would satisfy a wide range of consumer lifestyles and target millennials seeking their tastes and experiences.

The new model, released in a showcase on Tuesday in Seoul, was produced in a new brand vision, Project Prism, which emphasizes creation, customization and collaboration. Samsung will use Project Prism as the direction of its home appliance business division and apply it to future product lineups.

"The trend of focusing on my own tastes and experiences is spreading around Millennials," Samsung CEO Kim Hyun-suk said. Millennials refer to individuals who reached adulthood around the turn of the 21st century.

Bespoke means "tailored suits, custom-made. The lineup consists of eight types of models ranging from one door to four doors to allow consumers to combine products into optimal modules according to the number of family members, eating habits, lifestyles and kitchen forms. Consumers can make some 20,000 choices like a combination of Lego, a line of plastic construction toys, Kim said.

Colors include white, gray, charcoal, navy, mint, pink, coral and yellow. Samsung would allow consumers to check in advance which products match their home through the augmented reality showroom on its mobile app. The price ranges from 1.049 million won ($897) to 4.84 million won.