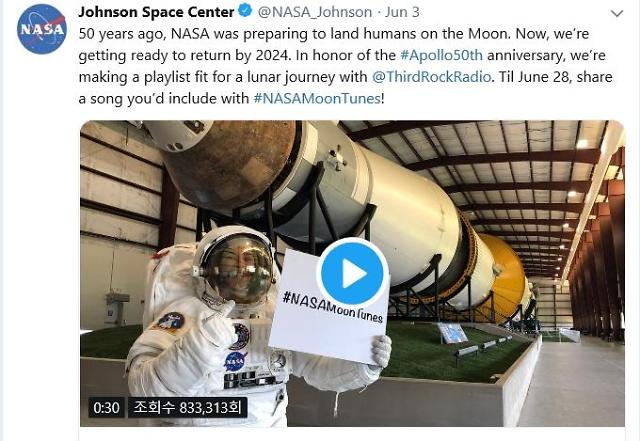 
SEOUL -- Three BTS songs will reach the moon when NASA sends astronauts back to the moon by 2024, more than half a century after the end of the U.S. Apollo lunar program.

NASA's Johnson Space Center cited widespread support from the K-pop group's global fan club, ARMY, in adding BTS songs to a playlist for a lunar voyage. "Wow, there are a lot of @BTS_twt & RM fans! Thanks for the submissions – we’ll add "Moonchild," "Mikrokosmos" & "134340" to the playlist!" the center tweeted.

Moonchild is a solo song released by BTS leader RM in October last year. In the lyrics, the rapper talks to the figurative "moon children" who can't embrace the warmth of the sunlight, but rather embrace their flaws and pain while blossoming in the moonlight.

Mikrokosmos, included in the group's latest album "MAP OF THE SOUL: PERSONA", refers to the concept of the human world being a smaller version of the universe at large. The song decorated a finale at a two-day concert on June 1-2 in London's iconic Wembley Stadium.

134340 is the asteroid number assigned to former-planet Pluto. Its lyrics can be interpreted from Pluto’s perspective as a planet that was cast away and stripped of its planetary status. The song was included in "Love Yourself 轉 'Tear", the third studio album released by BTS in May 2018.