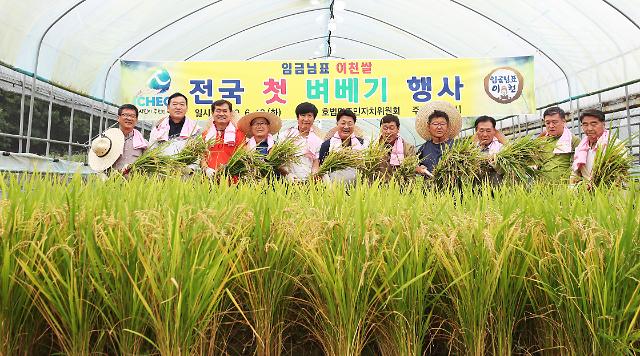 
SEOUL -- South Korea will ship 50,000 tons of rice through a United Nations agency to ease North Korea's acute food shortage. It would be South Korea's first rice aid in nine years and Seoul promised to send more by considering the food situation and other factors in its drought-ridden neighbor.

Rice will be handed over to the World Food Program (WFP) at a South Korean port. The U.N. agency will be responsible for the shipment and distribution of rice in the North, the South's unification ministry in charge of cross-border affairs said in a statement on Wednesday.

Calling its rice aid "minimum emergency assistance for North Korean people who are threatened with survival," the ministry said, adding South Korea is ready to make additional rice shipments by taking into account the progress of rice distribution and North Korea's food situation.

Rice aid came after South Korea made a remittance of $8 million this month to the WFP and the United Nations International Children's Emergency Fund (UNICEF). South Korea suspended almost all civilian inter-Korean exchanges since the North conducted its fourth nuclear test in January 2016.

The South's unification ministry said that the unconditional shipment of rice was made through consultations between Seoul and Washington and would contribute to creating "a positive atmosphere" between Pyongyang and Washington.

South Korean state warehouses are packed with surplus rice reserves, but many South Koreans are opposed to the unconditional resumption of rice aid, mainly because North Korea has long been suspected of diverting foreign aid and economic assistance to war goods or showpiece state projects.

Rice used to be the centerpiece of South Korea's economic aid to North Korea under South Korea's liberal ex-presidents who have pushed for active cross-border engagement. The last shipment of free rice was made in 2010. South Korean officials hope the WFP can secure much of its transparency through its long-term distribution and monitoring system in North Korea.