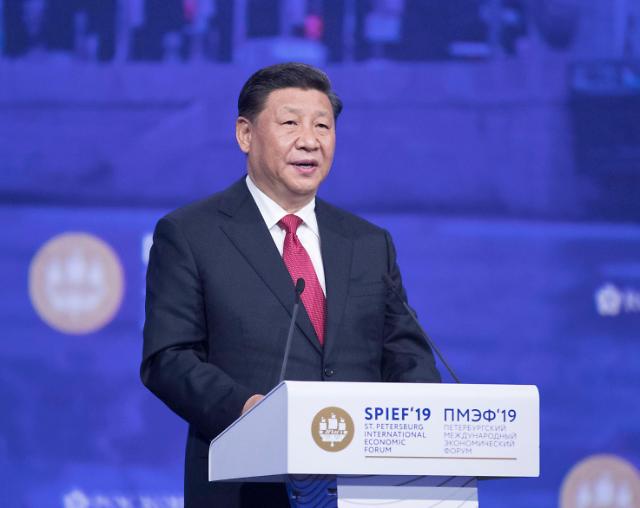 
BEIJING -- Chinese President Xi Jinping left for North Korea on Thursday, in a high-profile trip likely to highlight the countries' traditional alliance amid escalating Sino-U.S. competition on trade and other tricky geopolitical fronts.

It marks the first trip to the North by a Chinese head of state in 14 years and the fifth since Beijing and Pyongyang established diplomatic relations in 1949. Then Chinese President Hu Jintao visited Pyongyang in October 2005.

Xi's two-day state visit to the communist ally has raised expectations over his role in the efforts for the resumption of nuclear talks between Washington and Pyongyang, with some fearing that it could add new geopolitical complexities to the now-deadlocked negotiations.'

Hours before his trip, the U.S. slapped fresh sanctions on a Russian firm accused of helping the North evade sanctions, in an apparent call for Beijing to cooperate in Washington's pressure campaign to encourage Pyongyang's denuclearization.

About a week later, Xi will meet U.S. President Donald Trump on the margins of the Group of 20 summit in Osaka, Japan -- an arrangement that triggered speculation that he could use influence over Pyongyang to strengthen his hand in talks with Trump.

Xi's trip to the North also follows a political setback for Xi in Hong Kong, where the leadership in the semiautonomous Chinese territory suspended a push last week for legislation to allow extraditions to mainland China in the face of pro-democracy protests.

"Planning for this trip was likely under way before recent setbacks for Beijing in trade talks with Washington and before mass demonstrations in Hong Kong over the Tiananmen anniversary and the controversial extradition bill," said Leif-Eric Easley, a professor at Ewha University in Seoul. "Nonetheless, visiting Pyongyang is a welcome change of subject for Xi, providing him an opportunity to act as a pivotal statesman in East Asia," the professor added.

Xi will arrive at Sunan International Airport in Pyongyang, where North Korean leader Kim Jong-un is expected to greet him with a pomp-filled ceremony involving goose-stepping honor guards and flag-waving citizens. His motorcade will also receive a warm welcome from North Koreans lining both sides of a path leading to the Paekhwawon State Guest House, where he will stay.

Xi's official schedule disclosed to the media includes a summit with Kim and a visit to the Friendship Tower, a symbol of the fraternal bond between Beijing and Pyongyang. Xi could also watch a mass gymnastic performance. Given his relatively short stay in Pyongyang, the summit could take place on his first day. When former leaders, such as Jiang Zemin, visited the North for three days, their summits came on their first day.

The summit agenda may include the North's denuclearization and ways to strengthen the countries' traditional partnership on the occasion of the 70th anniversary of the establishment of bilateral ties. Xi could reiterate Beijing's stance that the denuclearization process should run in parallel with negotiations for a peace regime to supplant the armistice that halted the 1950-53 Korean War.

Some observers said that Xi could make pledges of economic or humanitarian support for the impoverished country, which could include food or fertilizers, in a way that does not outwardly flout international sanctions.

In a contribution to the Rodong Sinmun, the daily of the North's ruling Workers' Party, on Wednesday, Xi stressed China's desire to work together with the North to contribute to lasting regional peace, heralding Beijing's involvement in the Korea peace process.

"China will actively contribute to regional peace, stability, development and prosperity by strengthening communication and coordination with the DPRK and relevant parties to jointly push for progress in talks and negotiations on the issue," China's Xinhua News Agency quoted Xi as saying. DPRK stands for the North's official name, the Democratic People's Republic of Korea.

Kim has already visited Beijing for summits with Xi four times since March last year. His visits to China came shortly before or after his summits with U.S. President Donald Trump and South Korean President Moon Jae-in -- an indication that he and Xi have been in close consultation over summit diplomacy.
(Yonhap)