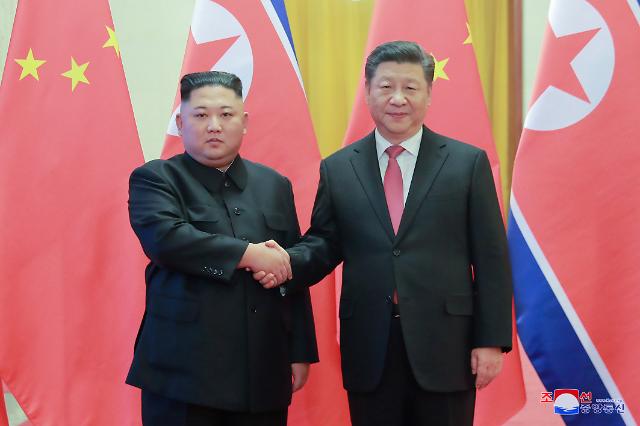 SEOUL -- Chinese President Xi Jinping held talks with North Korean leader Kim Jong-un, demonstrating the firm friendship of the two traditional allies ahead of a showdown with U.S. President Donald Trump at the Group of 20 meeting in Japan.

Kim and his wife, Ri Sol-ju, greeted Xi and his wife, Peng Liyuan, at Pyongyang's Sunan International Airport on Thursday, with some 10,000 North Koreans waving flowers and chanted welcoming slogans, according to China's state media.

Xi and Kim reviewed an honor guard and rode in a roofless limousine to leave for the Kumsusan Palace of the Sun, the mausoleum commemorating the North's former leaders, China's Xinhua News Agency reported. Xi's trip marked the first time that a Chinese head of state has visited North Korea in 14 years.

The summit in Pyongyang was seen as China's strategy to use North Korea as a diplomatic card in negotiations with Washington ahead of Xi's meeting with Trump at next week's Group of 20 meetings in Japan.

"China and North Korea could soon implement their very own maximum pressure strategy on Donald Trump, and this week’s summit between Xi Jinping and Kim Jong-un is surely the first step in solidifying such an approach," said Harry Kazianis, senior director of Korean Studies at the Center for the National Interest.

"While the visit will be more about symbolism then actual substance, with both nations feeling the heat from Washington -- North Korea on denuclearization and China on trade -- Xi and Kim stand to benefit greatly if they align jointly against the Trump Administration," Kazianis said.

"Xi and Kim understand that maximum pressure can go both ways. Beijing is surely concerned that the proposed meeting at the G-20 between America and China next week may not go well, with Trump possibly imposing more tariffs on Beijing," the U.S. expert said.

"China must make sure it is ready for such a threat and will need to gather as many point of leverage as it can to ensure Washington feels the pain for its pressure strategy. For China, that could mean undoing Trump's North Korea strategy of economic sanctions and international isolation by allowing the near free flow of goods between Pyongyang and Beijing," he said.

It is not a stretch to say that if Trump does indeed want to apply maximum pressure on China, the price could be a de facto nuclear state, "as Pyongyang would be under zero pressure to give up any of its deadly weapons programs if Beijing casts aside maximum pressure," Kazianis said.

Denuclearization negotiations have been in a stalemate following a failed summit between U.S. and North Korean leaders in Vietnam in February. Trump has advocated a "big deal" under which North Korea would dismantle all of its nuclear arsenal and related facilities in exchange for the removal of sanctions.

Showing fatigue at a prolonged deadlock in denuclearization talks, Kim has threatened to take a different path unless Washington changes its stance. This month, Kim sent Trump a goodwill letter marking the first anniversary of their first summit in Singapore, and the U.S. president described it as "beautiful" and "very warm."