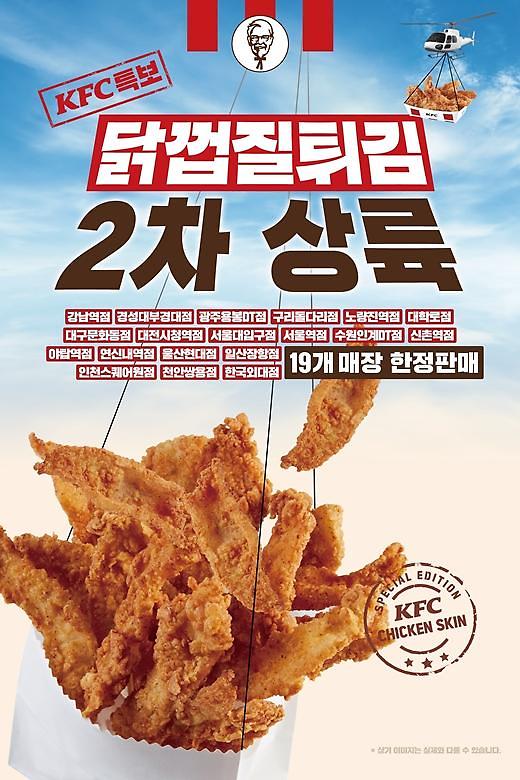 Chicken skin is considered a tidbit, only favored by foodies and fried chicken lovers. The fatty part of the chicken with rubbery texture is rarely seen at street bars and local chicken soup restaurants in forms of a warm salad or shish kebab.

A craze for fried crunchies began when KFC started selling the snack menu in six selected stores in Seoul and suburban areas on June 19. Dozens of people traveled for hours to wait for at least half an hour to get their hands on the special new menu priced at 2,900 won ($2.51), but many had to return home empty-handed because they were all sold out.

The stories of a few lucky South Koreans soon went viral. "Honestly, thinking about its price, it's really good. I think it's worth the wait," said "House", a user from South Korean online community Clien. Another user nicknamed "Masquerade" wrote: "It's all crunchy and very tasty. I like it!" People also uploaded positive video reviews of the chicken skin snack onto YouTube.

KFC added 13 more stores across the country to sell the limited edition menu because of endless requests from customers living far away from Seoul. "We have decided to increase sales outlets due to an unexpected response from consumers," a KFC official said.

Some skeptics saw the craze as just a passing fad. "It was not as good as I expected it to be," Jung Ju-yeon, a 32-year-old businesswoman, told Aju News. "I think it will be better if I cook the menu myself," she said. Another user "Exhaust" said: "It's not something that you would buy twice. It's too salty and oily."