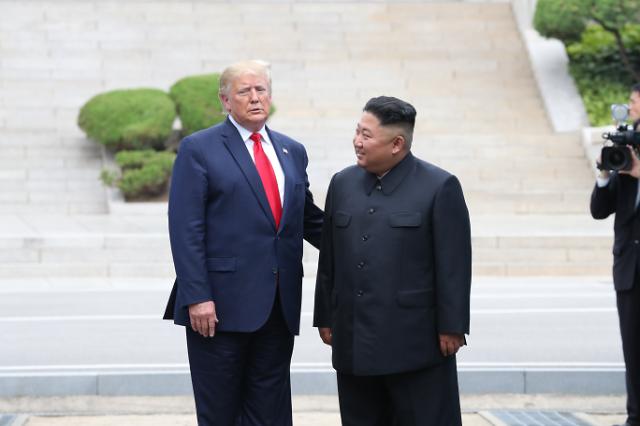 Kim said that his good personal relations with Kim made such a dramatic meeting possible "at just a one day's notice" and that their relationship "would continue to produce good results unpredictable by others and work as a mysterious force overcoming manifold difficulties and obstacles in the future, too," KCNA said.

"In 66 years since the Armistice Agreement in 1953 there happened such an amazing event of the top leaders of the DPRK (North Korea) and the U.S. exchanging historic handshakes at Panmunjom, place that had been known as the symbol of division," the agency said.

Trump was guided toward the north side of Panmunjom and set his foot on the soil of North Korea for the first time in history, KCNA said.

At an ensuing conversation, the two leaders discussed issues of easing tensions, ending "inglorious relations" between the two countries and making a dramatic turn and also issues of mutual concern and interest which become a stumbling block in solving those issues, and voiced full understanding and sympathy," it said.

"The top leaders of the two countries agreed to keep in close touch in the future, too, and resume and push forward productive dialogues for making a new breakthrough in the denuclearization of the Korean peninsula and in the bilateral relations," KCNA said.