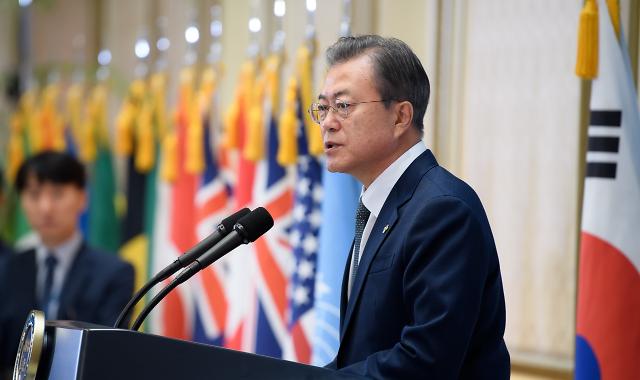 [Courtesy of the presidential security service]

SEOUL -- A military pact that enabled Seoul and Tokyo to share  military information in the face of common threats was mentioned as a target of retribution, getting on the nerves of the United States which has tried to set up a trilateral security network in Northeast Asia, as South Korea warms up for a trade war with Japan.

When President Moon Jae-in chaired a session with ruling and opposition party leaders on Thursday to discuss Japan's export restrictions and other issues, Sim Sang-jung, head of the progressive Justice Party, proposed that South Korea should dump the General Security of Military Information Agreement (GSOMIA) with Japan as a retaliatory step.

In response, the president's top security advisor said South Korea can review whether to renew the military pact only if a trade conflict intensifies, according to Sim. "For now, we have a position to maintain it, but we can review it depending on the circumstances," Chung Eui-yong, director of the National Security Office, was quoted as saying.

The conservative government of South Korea's jailed ex-president Park Geun-hye endorsed the military accord in November 2016 at the height of North Korean missile and nuclear threats, with the blessing of Washington which wants a trilateral security alliance with Seoul and Tokyo.

North Korea strongly denounced the pact while other interested parties in Northeast Asia showed signs of discomfort. At the time, China was in resentment over the deployment of an advanced U.S. missile shield in South Korea.

Officials and business leaders are worried about irrecoverable trade relations between Seoul and Tokyo if Japan takes additional measures, including the removal of South Korea from a so-called "white list" of trusted importers. Moon has warned of strong countermeasures.

At the center of the latest row between Seoul and Tokyo is a decision by South Korea's highest court in October last year that acknowledged individual rights to get compensation for South Korean workers who were drafted for forced labor during Japan's 1910~45 colonial rule. Seoul proposed a joint fund put together by South Korean and Japanese firms, while Tokyo wanted an arbitration panel brokered by a third country.

Japan has insisted colonial-era issues were settled in a 1965 agreement that restored diplomatic ties with the payment of $500 million. However, supreme court justices ruled that they cannot accept the Japanese court's ruling because it ran against South Korea's constitutional value and was based on the premise that forced labor during Japan's colonial rule was legitimate.