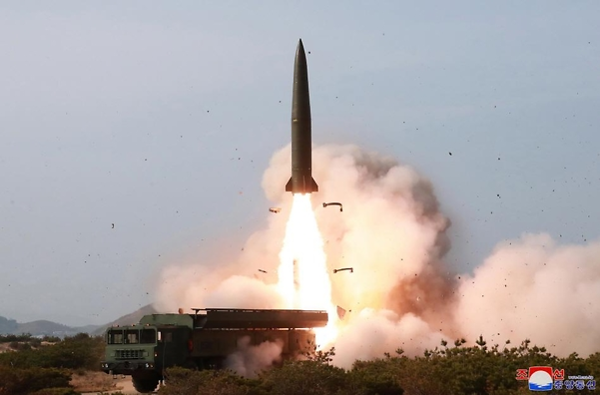 
SEOUL -- North Korea fired unidentified short-range projectiles into the sea again off its east coast as South Korea and the United States revealed a gap in assessing the gravity of what appeared to be calculated low-level provocations ahead of crucial denuclearization talks.

The projectiles were fired at 2:59 a.m. and 3:23 a.m. Friday from a coastal area in Yonghung, South Hamgyong Province, the South's Joint Chiefs of Staff said, adding they flew about 220 kilometers (136 miles) at an altitude of 25 km. JCS officials were cautious, declining to give more information, but the presidential office said North Korea appeared to have launched short-range ballistic missiles.

"Although working-level talks have been delayed a little, and no date set, the tests are also likely designed to increase North Korea’s leverage in these talks. As such, they underscore the importance and fragility of Pyongyang’s ‘self-restraint’," said Dewey. "Such tests also signal to domestic audiences that Pyongyang is able to maintain its military capabilities during talks."

Seoul expressed concerns about North Korea's continued missile launch, but U.S. President Donald Trump played down its significance. "I think it's very much under control," Trump said. Asked if he can still continue denuclearization talks, Trump said, "Oh, sure, because these are short-range missiles." "We never discussed that. We discussed nuclear. What we talked about is nuclear," he said.

"Talks and summits between North Korea and the US are positive indicators for a reduction in the risk of interstate war, but do not indicate a shift in the conflicting motivations and strategic interests of the countries involved. Accordingly, North Korea is likely to increase the frequency and intensity of its belligerent rhetoric and lower-level weapons demonstrations," Evans said.

If high-level US officials make specific statements about security assurances, such as a non-aggression pact, that would further reduce the risk of conflict, he said. A security guarantee has been one of Pyongyang's key demands put forward at talks between Trump and Kim.

U.S. and South Korean troops will stage a command post exercise code-named "19-2 Dong Maeng (alliance)" in August for about three weeks. Seoul said the exercise is aimed at testing independent wartime operational capabilities. North Korea condemned it as a rehearsal for invasion that could affect denuclearization talks.

At their historic meeting on June 30 in the truce village of Panmunjom in the middle of the demilitarized zone which bisects the Korean peninsula, Trump and Kim agreed to resume stalled denuclearization talks. However, no concrete timetable has not bee announced.

In a commentary on Friday, the North's official Korean Central News Agency (KCNA) demanded South Korea stop "dangerous hostile military moves against the trend of peace created on the Korean peninsula. "It is a prerequisite for improving the inter-Korean relations and ensuring peace on the Korean peninsula to call an overall and permanent halt to anti-north war drills, the root cause of confrontation and war."

The commentary accused South Korea of orchestrating a "handshake of peace" in public while holding exercises behind the scene "in collusion with outsiders." "Peace and war drill, improvement of the bilateral relations and hostile military moves can never go together."