S. Korea drawn into trade with Japan at risk of cracking in security cooperation 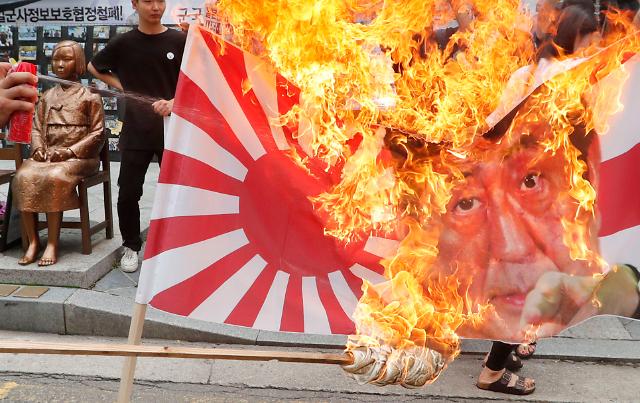 A file picture shows the torching of a Japanese imperial flag and the portrait of Japan's prime minister during an anti-Japanese rally in Seoul. [Yonhap News Photo]


SEOUL -- South Korea was drawn into an unavoidable trade war with its former colonial ruler after Japan disregarded a proposed diplomatic solution and took fresh retaliatory steps to restrict exports in a move that could have a crippling impact on broad relations between the two key allies of the United States.

President Moon Jae-in called an emergency cabinet meeting immediately after Japan approved a proposal to remove South Korea from a list of trusted trading partners Friday in the second round of economic retaliation nearly a month after restrictions were imposed on exports of key materials used for the production of microchips and displays on July 4.

Japan's new measure takes effect on August 28. South Korea was added to a list of 27 countries, which were granted simplified procedures for purchasing sensitive goods, in 2004 and became the first country to lose preferential status. Japanese exporters will need individual authorization for exports of around 1,120 dual-use items, causing significant delays and disruptions to South Korean importers.

"Our government has consistently expressed its willingness to hold diplomatic consultations and dialogue, taking an open attitude to the end, to resolve the issue through dialogue and communication," spokesperson Ko Min-jung said. "From now on, our government will respond firmly to Japan's unfair measures."

South Korea has warned of stern countermeasures, while business leaders have expressed concern about irrecoverable trade relations between Seoul and Tokyo. The General Security of Military Information Agreement (GSOMIA) that enables Seoul and Tokyo to share military information in the face of common threats has been mentioned as a target of initial retribution.

The conservative government of South Korea's jailed ex-president Park Geun-hye endorsed the rare military accord in November 2016 at the height of North Korean missile and nuclear threats, with the blessing of Washington which wants a trilateral security alliance with Seoul and Tokyo.

Tokyo's trade retaliation sparked a broad boycott campaign against Japanese products, especially among young people who had been generally indifferent to a diplomatic row related to Japan's 1910-45 colonial rule. A Gallup Korea survey published on July 26 showed that 80 percent of South Koreans were reluctant to buy Japanese products.

At the center of the latest row between Seoul and Tokyo is a decision by South Korea's highest court in October last year that acknowledged individual rights to get compensation for South Korean workers who were drafted for forced labor during Japan's 1910~45 colonial rule. Seoul proposed a joint fund put together by South Korean and Japanese firms, while Tokyo wanted an arbitration panel brokered by a third country.

Japan has insisted colonial-era issues were settled in a 1965 agreement that restored diplomatic ties with the payment of $500 million. However, supreme court justices ruled that they cannot accept the Japanese court's ruling because it ran against South Korea's constitutional value and was based on the premise that forced labor during Japan's colonial rule was legitimate.