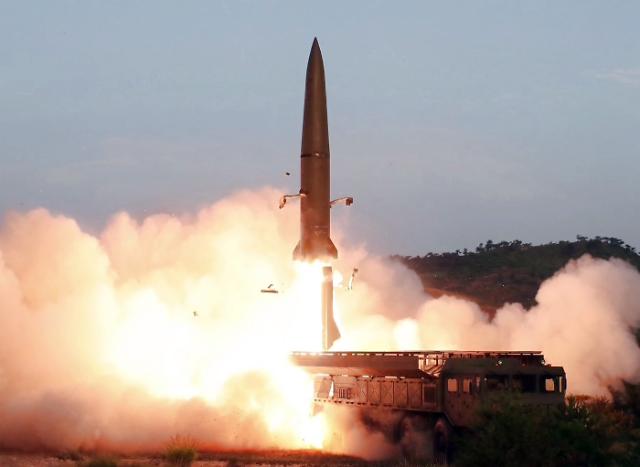 
SEOUL -- In a sign of discontent, North Korea launched short-range projectiles again into the sea, warning the nuclear-armed country could ditch peace agreement and seek a "new road" unless South Korea and the United States stop hostile military moves such as a joint military exercise that kicked off this week with no publicity.

Two projectiles were launched from a place in Kwail County, South Hwanghae province, at 5:24 a.m. (2024 GMT) and 12 minutes later, and traveled 450 kilometers (279 miles) at a peak altitude of 37 km before landing off the east coast, the South's Joint Chiefs of Staff (JCS) said, assessing them as short-range ballistic missiles.

It was the fourth launch of its kind in two weeks that began on July 25. Almost simultaneously, the North's foreign ministry issued a statement condemning the joint military exercise by U.S. and South Korean troops.

"Although the U.S. and South Korean authorities are playing all sorts of tricks to justify the joint military exercise, its aggressive nature can neither be covered up nor whitewashed in any manner," read the statement published by the North's official Korean Central News Agency (KCNA).

"The U.S. and South Korean authorities remain outwardly talkative about dialogue. But when they sit back, they sharpen a sword to do us harm," the statement said. "If this is what they call 'creative approach' and 'imaginative power beyond common sense,' we will be compelled to seek a new road as we have already indicated."

"We remain unchanged in our stand to resolve the issues through dialogue. But the dynamics of dialogue will be more invisible as long as the hostile military moves continue," the North said in Tuesday's statement.

There was no official announcement from U.S. and South Korean military authorities when they started their joint exercise on Monday with "crisis management staff training" for a week to be followed by simulated war games. In a bid to expedite denuclearization talks, U.S. and South Korean troops have suspended major annual joint military drills.