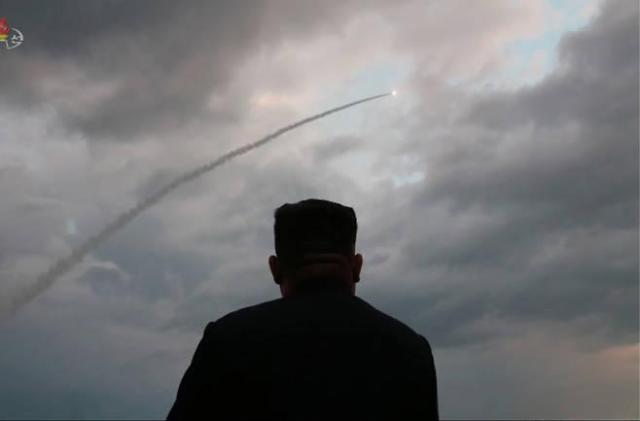 SEOUL -- Through its recent test launch, North Korea appeared to have unveiled a new multiple-launch guided rocket system with a range of at least 250 kilometers (155 miles) that should be characterized as a ballistic missile system, a U.S.-based expert said.

"North Korea appears to have launched a new, guided, multiple-launch rocket system with a range of at least 250 km. This is a 'ballistic missile' system," said Vann H. Van Diepen, a consultant who worked in a variety of positions in the U.S. Department of State, in an article published by 38 North, the website of a U.S. think tank.

Most of the characteristics of the new system are unknown, but it has the capacity to extend North Korea's current 190 km-range multiple launch rocket capabilities at least another 60 km, the expert said, adding this will increase opportunities to choose between multiple-launch rockets and "real" short-range ballistic missiles in tailoring some attacks and complicate the task of U.S. and South Korean missile defenses.

From a technical standpoint, a guided rocket is a missile, and a missile with a ballistic trajectory over most of its flight path is a ballistic missile, Van Diepen said. "The new 'guided, multiple-launch rocket system' qualifies on both counts," he said, adding that with the improvement and miniaturization of guidance technology, smaller rocket systems can be equipped with guidance, changing the traditional notion that rockets were small while missiles were large.

The new system with all-inertial guidance could be useful against area targets in a multiple-rocket saturation attack, while with satellite-aided or terminal guidance, it could directly threaten a wide variety of point targets, Van Diepen said.