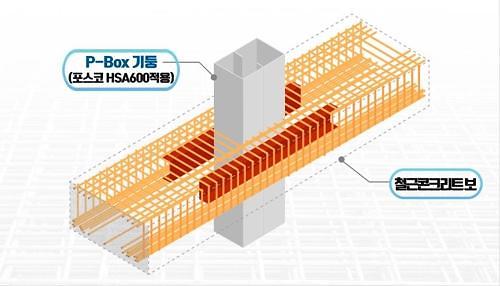 Posco combined steel reinforced concrete beams, a horizontal structure, with a concrete-filled steel tube named "Posco-Box (P-Box), saying its technology is "an original construction method that does not rely on foreign or domestic technology."

"Posco's unique solution will bring about innovative changes in the building market." the steel company said in a statement posted on its website. P-Box improved strength by filling concrete inside a square-shaped column made by bending a premium hot-rolled product called HSA600 with a thickness of 6 to 16 millimeters.

Existing rectangular steel pipes were expensive and difficult to secure quality because they are made by welding all four corners, but Posco said that P-Box is easy to manufacture because it only welds the center by bending hot-rolled materials. The eco-friendly method that can reduce carbon emissions uses a 15-meter-long long P-Box built in advance so that three stories can be constructed at a time.

"The existing rebar concrete construction method has difficulties due to a rise in labor costs," Kim Jin-won, a senior researcher at Posco's research institute, was quoted as saying."We hope that demand for new technologies, which are more economical and stable than conventional labor-intensive methods, will grow at home and abroad."

To secure a competitive edge in price, Posco applied a wider beam than the column's width as a girder which serves as a link between columns. If a column of conventional techniques requires a size of 1,000 mm x 1,000 mm, the new technology could bear the same weight with only 500 mm x 500 mm. Smaller columns increase the effective area of buildings in the same area of land.

It is the result of joint research with engineering companies to develop the realistic technology which has already been tested for competitiveness and applied to more than 11 locations, satisfying engineers who said the new technology can save costs, reduce the construction period and increase the area available for sale, Posco said.