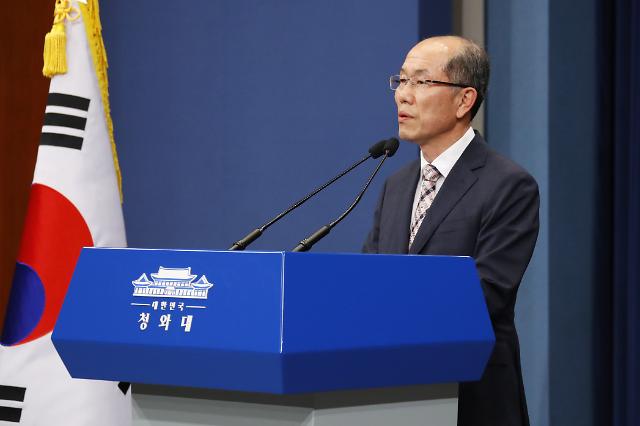 
SEOUL -- In apparent retaliation for trade restrictions, South Korea ditched a crucial pact with Japan on sharing sensitive military information, risking a full-blown trade war between the two U.S. allies which have taken a common position against security threats from North Korean nuclear weapons and missiles.

The decision, which was proposed by the National Security Council (NSC), a high-level security consultation body, and endorsed by President Moon Jae-in, betrayed expectations that South Korea may retain the General Security of Military Information Agreement (GSOMIA). As part of its global strategy to set up a security network in Northeast Asia, Washington had wanted Seoul and Tokyo to maintain it despite their trade conflict.

The pact has been frequently mentioned as a target of retribution in South Korea since Japan restricted exports of key materials for microchips and displays in early July. When Tokyo excluded Seoul on August 2 from a "white" list of trusted trading partners, Moon vowed to strike back step by step at Japan's "reckless" trade retaliation.

South Korea will inform Japan of its decision soon through diplomatic channels by the August 24 deadline, NSC deputy director Kim You-geun said in a statement, citing a "significant change" in security cooperation between South Korea and its former colonial ruler.

Kim accused Tokyo of excluding Seoul from the white list without providing a clear basis while arguing that the breach of trust between the two countries has resulted in security problems. "Under these circumstances, the government judged that it would not be in our national interests to maintain the accord which was forged for the purpose of exchanging sensitive military information for security purposes."

The conservative government of South Korea's jailed ex-president Park Geun-hye endorsed the accord in November 2016 at the height of North Korean missile and nuclear threats, with the blessing of Washington. North Korea has strongly denounced the pact.

South Korea's hardline stance is certain to spark concerns about a setback in a trilateral security alliance. However, NSC director Chung Eui-yong had suggested earlier that without GSOMIA, Seoul, Tokyo and Washington could use a separate information protection agreement.

Tokyo's trade retaliation sparked a broad boycott campaign against Japanese products, especially among young people who had been generally indifferent to a diplomatic row related to Japan's 1910-45 colonial rule. Business leaders have been worried about irrecoverable trade relations.

At the center of the row is a decision by South Korea's highest court in October last year that acknowledged individual rights to get compensation for Korean workers who were drafted for wartime forced labor. Seoul had proposed a joint fund put together by South Korean and Japanese firms, while Tokyo had wanted an arbitration panel brokered by a third country.

Japan has insisted colonial-era issues were settled in a 1965 agreement that restored diplomatic ties with the payment of $500 million.