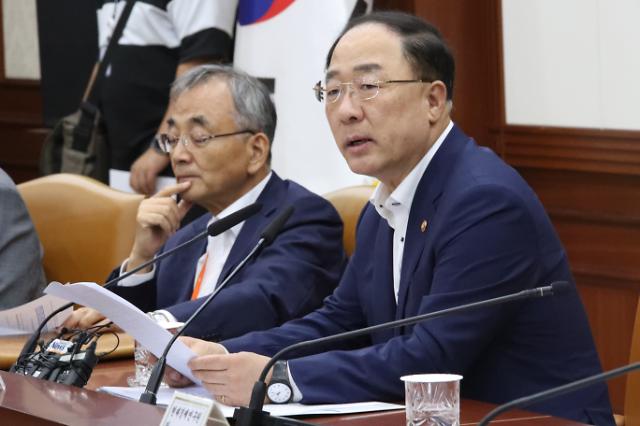 SEOUL -- South Korea's top economic official expressed concerns about a prolonged conflict with Japan due to the termination of a hard-won military pact on sharing sensitive military information, saying Tokyo can make "arbitrary judgment" to impose export restrictions further at any time.

Japan has yet to take any concrete steps after South Korea refused to extend the General Security of Military Information Agreement (GSOMIA) in a decision reached at the meeting of a high-level security consultation body on Thursday, heralding the escalation of a trade war that began in early July and followed a diplomatic dispute over wartime forced labor.

The termination of GSOMIA demonstrated President Moon Jae-in's determination to fight back against Japan's "reckless" trade retaliation orchestrated by Prime Minister Shinzo Abe. It definitely offended Washington, which has tried to set up a trilateral security alliance aimed at checking China in Northeast Asia.

Strategy and Finance Minister Hong Nam-ki conceded that from now, it would be hard to predict "future developments" as the conflict depends on how Japan will react. "From an economic perspective, difficulties and uncertainties may not easily go, depending on Japan's reaction with a decision to terminate GSOMIA," he said Friday at a meeting of state-run and private think tanks.

"The bigger problem is the presence of uncertainty that export restrictions can be imposed at any time based on the arbitrary judgment of the Japanese government," Hong said, pointing to overlapping risk factors such as a deepening Sino-U.S. trade conflict and political turmoil in Hong Kong.

"I think there will be more difficulty in resolving Japan's export restrictions and economic retaliation measures through dialogue as a result of the termination of GSOMIA. Minimizing direct damage to companies is important, but uncertainties over the economy are more worrisome as Japan's measures last for a long time," Hong told reporters earlier.

In a Facebook post, Trade, Industry and Energy Minister Sung Yun-mo accused Japan of sticking to unreasonable demands from the outset. "Japan continues to demand that what is not true be acknowledged as facts as a precondition for dialogue." We have no choice but to question the sincerity of Japan's will to talk."

Washington expressed disappointment at Seoul's decision to scrap the military pact, urging the two countries to solve their row through dialogue. "We're disappointed to see the decision that the South Koreans made about that information-sharing agreement," U.S. Secretary of State Mike Pompeo said. "We were urging each of the two countries to continue to engage, to continue to have dialogue."

"We hope each of those two countries can begin to put that relationship back in exactly the right place," Pompeo said. "It's absolutely valuable not only to the work you mentioned in the context of North Korea, but important in the work we do all around the world."

The Pentagon expressed "strong concern and disappointment." "We strongly believe that the integrity of our mutual defense and security ties must persist despite frictions in other areas," Pentagon spokesman Dave Eastburn said in a statement.

South Korean Foreign Minister Kang Kyung-wha stressed that South Korea's decision should be swayed by other factors. "(It is) a separate issue from the South Korea-U.S. alliance. This is the decision we made at a time when it was eventually triggered by trust issues between South Korea and Japan."