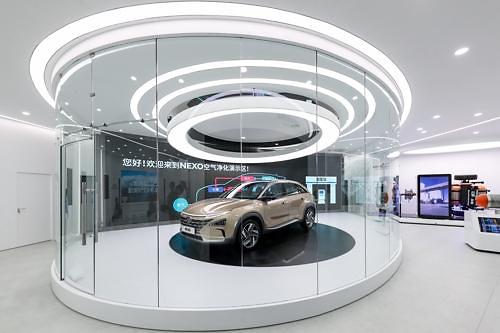 SEOUL -- Hyundai Motor has opened a promotion center for its next-generation electric vehicle technology in China's heart of finance and technology. It consists of different zones where people can experience and learn about the carmaker's clean energy technology.

Hyundai hopes to promote its image as a trend leader in China and revitalize its business in the world's largest car market. The combined market share of Hyundai Motor and its affiliate Kia Motors in China's commercial vehicle market stood at 3.9 percent in the first quarter of 2019.

While other global carmakers focus on electric vehicles using lithium-ion cells, Hyundai has touted hydrogen fuel as an alternative to solve global problems such as pollution and restore resource depletion because of its eco-friendly characteristics.

In October 2018, Hyundai forged a partnership with Engie, a French multinational electric utility company, and Air Liquide, a multinational company which supplies industrial gases and services to various industries. Based on the deal, Hyundai will establish hydrogen charging stations and ship some 5,000 FCEVs to France by 2025.