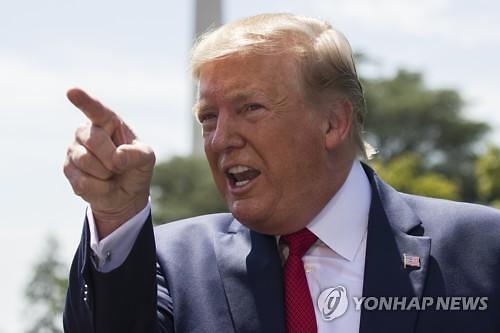 The negotiations have yet to resume despite Trump and North Korean leader Kim Jong-un's agreement to do so within several weeks after their impromptu meeting on the inter-Korean border on June 30.

"I think that North Korea has tremendous economic potential, and I think that Kim Jong-un sees that," Trump said at a joint press conference with French President Emmanuel Macron at the conclusion of a Group of Seven summit in Biarritz, France.'

Trump especially noted North Korea's geographical location between China, Russia and South Korea, saying that barring flying the only way to reach the South is through the North. "So, railroads and everything else, so many things want to happen there," he said.

Trump was likely alluding to the sanctions relief and other economic concessions Washington would offer if Pyongyang agreed to dismantle its nuclear and ballistic missile programs. Only hours earlier, Trump had mentioned North Korea while discussing Iran's potential.

"And you know who else has great potential? North Korea. Kim Jong-un," he had said. "And I don't think North Korea wants to blow it. Because if they blow it, it won't be good."

Talks between Washington and Pyongyang have stalled since Trump and Kim's second summit in Vietnam in February ended without a deal. Still, Trump has continued to express confidence in the North Korean leader, dismissing the regime's recent short-range ballistic missile tests as unimportant.
(Yonhap)