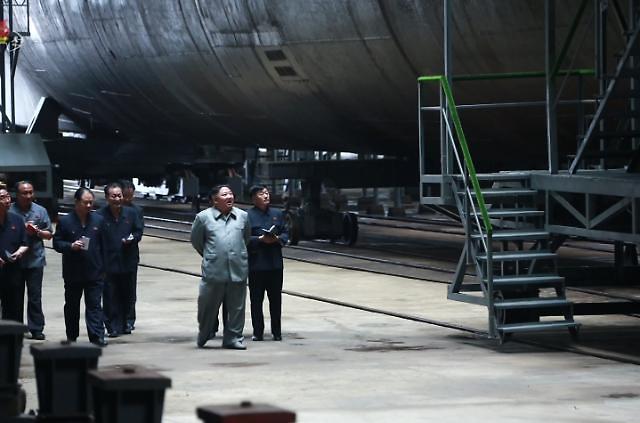 
SEOUL -- U.S. experts believe the actual use of North Korea's ballistic missile submarine takes time after acceptance trials and a shake-down cruise for more than a year, even though Pyongyang claimed its operational deployment is "near at hand."

Even if launched today the submarine will have to undergo a period of fitting-out, acceptance trials, commissioning and shake-down cruises before becoming truly operational, Joseph Bermudez, a US missile expert, and Victor Cha, a former national foreign policy adviser, said in an article published by the Center for Strategic and International Studies (CSIS), a think tank based in Washington. A shake-down cruise is intended to prepare a new vessel for regular service.

"This process could take easily take more than a year depending upon issues that arise," the experts said, adding that even if North Korea were to conduct early SLBM test from the new submarine, it would not be truly operational for some time.

"Regardless, the construction and commissioning of a true SSB (ballistic missile submarine) would represent a significant escalation of the North Korean ballistic missile threat and complicate defense planning in the region," the experts said.

The Sinpo-class submarine and a submersible missile test stand barge remain berthed at essentially the same locations as they have been since January 2019, but they have been joined by what appears to be a midget submarine and a support vessel moored alongside the test stand barge, the experts said, adding the support vessel is interesting because such vessels have been used to tow the barge out to sea for SLBM tests.

"While this, and the presence of a crane on the dock and people at the test stand barge, are suggestive of preparations for a forthcoming test, there is no conclusive evidence that this will occur in the near future," the experts said, pointing to the continued low-level movement of parts and components into and out of the parts yards adjacent to the construction halls. "There are no indications of a recent, or preparations for a new, ejection test."