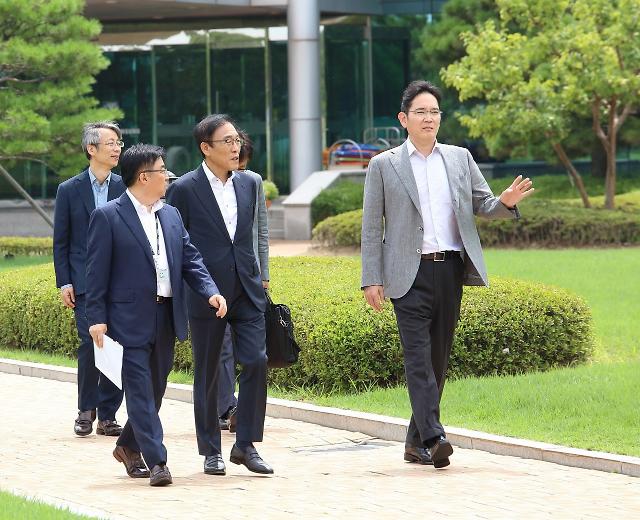 SEOUL -- In a decision that shook the business community, South Korea's highest court asked an appeals court to review a suspended jail term which was handed down to Samsung Group's de facto leader Jay Y. Lee on bribery charges stemming from a corruption scandal involving a jailed ex-president.

The Supreme Court's order for retrial of ex-president Park Geun-hye, her crony, Choi Soon-sil, and the 51-year-old only son of Samsung's bed-ridden group patriarch Lee Kun-hee, sprang a surprise as the world's largest producer of smartphones and microchips faces growing uncertainties caused by a global economic slowdown, a Sino-U.S. trade war and a trade war between South Korea and Japan.

Jay Y. Lee was arrested in early 2017 after ex-president Park Geun-hye was ousted. Originally, he received a five-year prison sentence for embezzling company funds to bribe Choi, who has been at the center of a massive corruption scandal and indicted for coercing business leaders to donate money to her business entities.

Lee was released from prison in February last year, when the high court sentenced him to two years and six months in prison with a stay of execution for four years.

The lower court ruled that Lee was found guilty of providing bribes to bankroll the equestrian training of Choi's daughter in Germany at Park's request for outright favors. Lee was also convicted of perjury and hiding assets overseas. But the appeals court reversed the lower court's decision that some bribes were used to ensure the smooth transfer of group leadership.

Lawyers have argued there was no need for Lee to use bribes for the transfer of power from his father because the son's leadership was already strong before a corruption scandal surfaced. In its decision on Thursday, the supreme court ruled that three horses gifted by Samsung to Choi can be considered as bribes and Samsung's 1.6 billion-won donation to a sports foundation run by the Choi family was part of bribes.

"The original judgment that the defendants did not believe the horses they provided to Choi Soon-sil were not bribes and that the court misunderstood the laws regarding bribery," the top court said.

Lee could be sent back to prison depending on the appeals court's review and Samsung could suffer from a leadership vacuum again. He has made crucial decisions on strategic issues since his father was hospitalized in May 2014 after being hit by a stroke.

The corruption scandal fanned public sentiment against corporate donations, which have long been a controversial issue in South Korea due to concern about collusive ties between businessmen and politicians.

Park was on trial on multiple charges including bribery, abuse of authority, coercion and leaking government secrets. She was accused of abusing her status and power to solicit bribes from top conglomerates, although she claimed businessmen have voluntarily donated money.

A lower court sentenced Choi to 20 years in prison. Two months later, Park was given a 24-year jail sentence. The appeals court raised Park's jail sentence by one year to 25 years and upheld a 20-year prison sentence for Choi. Supreme Court Chief Justice Kim Myeong-su said that Park's bribery charges should be separated from her original case.