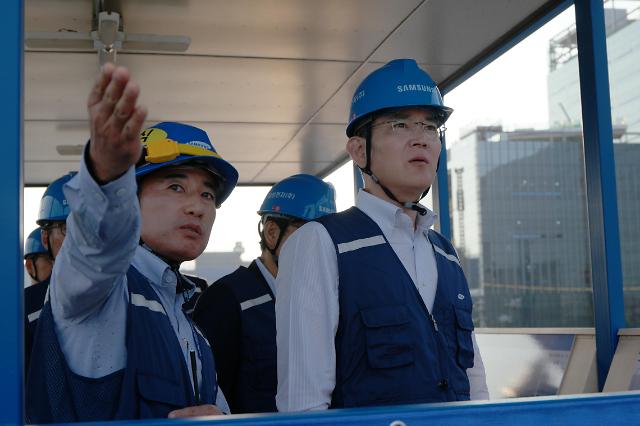 SEOUL -- Samsung Electronics made an appeal for public understanding of its difficult situation in global markets after South Korea's highest court ordered the review of a suspended sentence for Jay Y. Lee, the virtual head of South Korea's largest conglomerate in a decision that surprised the business community reeling from Japan's trade retaliation.

"We are deeply sorry to have caused concern to the people. In the future, we will stick to our corporate role so that we don't repeat a past mistake," Samsung Electronics said in a statement. "We have suffered from no little difficulties due to internal and external uncertainties in recent years."

The world's largest producer of smartphones and microchips called for public help to help overcome the current crisis, citing growing uncertainties. "We ask for more help and support so that we can overcome the crisis and contribute to the national economy in an economic situation where uncertainty has been growing more and more."

The appeal came soon after the Supreme Court asked an appeals court to revisit the February 2018 ruling that sentenced Lee to two years and six months in jail with a stay of execution for four years. Since Lee was arrested in February 2017, Samsung and other business bodies have appealed for mercy, citing the gravity of its impact on South Korea's economy.

The high-profile trial has been a matter of great public interest as it was closely related to a corruption scandal that sparked widespread public fury and street demonstrations, leading to the ouster of ex-president Park Geun-hye. Samsung and lawyers have argued that Lee was forced to make cash contributions under "irresistible" pressure from Park.

Samsung has warned of a possible crisis next year due to uncertainties caused by a global economic slowdown and a Sino-U.S. trade war, saying it would be affected by a prolonged dispute over Japanese restrictions on exports of photoresists, fluorine polyimide and etching gas used for the production of microchips and displays.

"It is hard to see a step forward due to a global economic slowdown coupled with the direct and indirect impact of the U.S.-China trade war," Samsung's mobile division head Koh Dong-jin told Korean reporters after an event in New York on August 8 to show the company's iconic phablet phone.