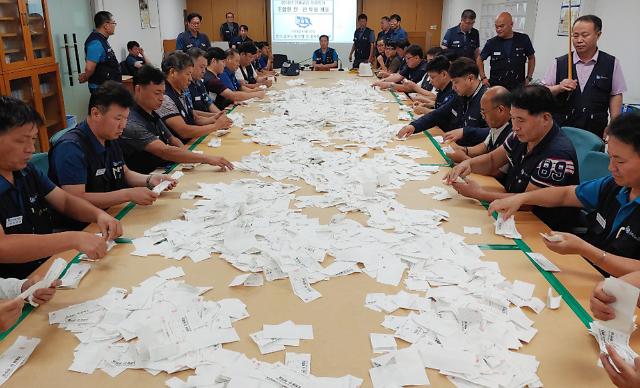 SEOUL -- Hyundai Motor's militant labor union, known for frequent strikes to squeeze the greatest benefit out of company profits, won rare praise after unionized workers cast a vote for a negotiated wage deal, which came without strikes for the first time in eight years.

The union said that 56.4 percent of 43,871 Hyundai Motor workers who cast ballots on Monday approved the wage deal that included an increase of 40,000 won ($32.9) in basic monthly salary, a whopping cash bonus, stocks and other benefits.

Frequent strikes, excessive demands and intervention in management have hurt Hyundai Motor's competitiveness, contributing to low productivity and slow sales. Workers at Hyundai Motor and its affiliate, Kia Motors, are relatively well paid, along with good fringe benefits and welfare. However, they always remain ungratified, struggling to find a new source of extra income such as bigger overtime, bonuses, and other one-time incentives.

This year, Hyundai Motor's union made an unusual concession, citing growing uncertainties in business environments such as a Sino-U.S. trade war, a trade dispute between South Korea and Japan and a slowdown in the auto industry. In response to Japan's export regulations, the union agreed to support the localization of materials and components.

At a cabinet meeting on Tuesday, Prime Minister Lee Nak-yeon praised Hyundai Mortor's management and union for making a "mature" decision. "Hyundai Motor's labor and management have decided to resolve the issue of the labor-management agreement and the localization of materials and components in consideration of changes in economic conditions at home and abroad and difficulties in the auto industry."

Hyundai Motor faces a tough business environment and negative factors such as a prolonged U.S.-China trade conflict, weak investor sentiment and sluggish economic conditions in emerging economies. From January to August, the country's top carmaker sold 2.85 million vehicles, down 4.3 percent from 2.98 million a year ago.

The 81-year-old chairman has almost disappeared from public eyes last year and this year, sparking rampant speculation about his health. In May, Chung Mong-koo was recognized again as group chairman after state anti-trust regulators consulted a doctor's note to see if his health has deteriorated so much that he could not participate in decision-making on crucial group affairs.

Chung Eui-sun, 48, has virtually headed the group. Hyundai and some other conglomerates are undergoing a generational change. Of the third and fourth-generation members of conglomerate owners, Chung Eui-sun has been cited by market watchers as a promising next leader who can properly manage the auto group after his father retired.