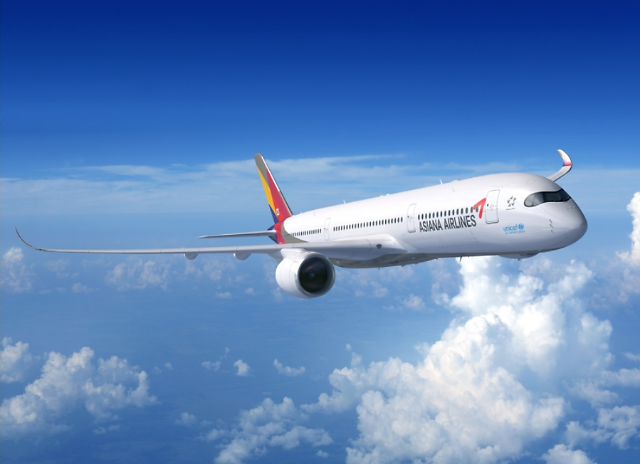 SEOUL -- Aekyung, a mid-sized business group specializing in home, health, and beauty care products for daily use, was among three preliminary bidders to acquire South Korea's second-largest flag carrier, Asiana Airlines, which has been up for sale in return for a bailout from creditors.

The Kumho Asiana Group and Credit Suisse, the lead manager for the sale of Asiana, remained tight-lipped on Tuesday after they received initial bids to find a new owner. However, three names were widely mentioned -- Aekyung, KCGI and a consortium involving Mirae Asset Daewoo Co., a major brokerage house, and HDC Hyundai Development.

In April, Kumho Industrial, the holding company of Kumho Asiana,  offered to sell its airline business under an agreement with Korea Development Bank (KDB), a state policy bank. Kumho Industrial would turn over a 31 percent stake in Asiana to a new owner together with two low-cost carriers, Air Seoul and Air Busan.

The price was estimated at more than 1.5 trillion won ($1.23 billion), including a management premium and the acquisition of new shares to be issued. Kumho hopes to complete the sale of Asiana and its affiliates within this year. "As Asiana is South Korea's second-largest flag carrier, it is still an attractive sales item," an industry source said, adding potential buyers are cautious due to the uncertain internal and external business environment.

Asiana has tried to raise money through asset sales, but the airline lost market confidence in April due to its unclear 2018 financial statement, raising concerns about its debt repayment. Kumho Asiana's founder Park Sam-koo abandoned all executive posts at group units to take responsibility for causing market disturbances and liquidity woes. The group's ruling family has offered shares and private assets as collateral.